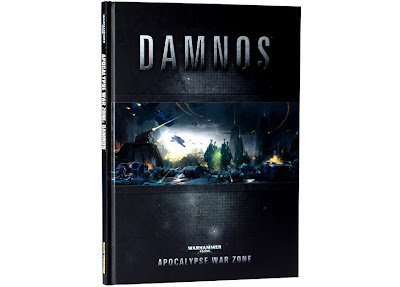 via Games Workshop
This 68-page, hardback, full colour supplement to the Apocalypse rulebook contains:
- A detailed background of the war for Damnos, as fought between Captain Sicarius' 2nd Company of Ultramarines, and the Necrons under the command of the Phaeron known as the Undying.
- A complete background of the characters involved, regiments of note, key battles fought, and unit heraldries.
- A battle report replaying the Battle for the Necropolis.
- A miniatures showcase featuring the key troops and characters of War Zone Damnos.
New Apocalypse rules, including Damnos Terrain (rules for fighting games of Apocalypse on ice worlds), and the Ice Storm Unnatural Disaster table.
- 4 new Apocalypse missions exclusive to War Zone Damnos.
- 9 new strategic assets exclusive to War Zone Damnos.
- New Damnos Finest Hours special rules.
- 22 new Apocalypse datasheets detailing the key formations of the Ultramarines and Necrons.
- An appendix section providing even more detail to the campaign.
9/18/2013
Natfka
40k, 6th Edition, News Headlines, Warhammer 40k