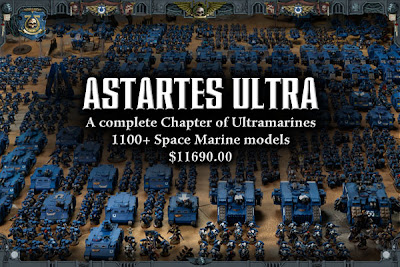 Here it is, buying a full Ultramarines Chapter all at once is now available and ready at a single click of a button. No need figuring what you need, its all here.

This is both very cool, and yet so far out of reach for most everyone. Take a look at the contents..... 47 rhinos and  39 tactical squads. Although if I had 12k sitting around, it should head towards retirement and or a nice vacation, or paying off the house......... Still one can dream.


Now to be honest, I think the best part of this bargain is the signed copies of everything that you get alongside it. Of course if someone was to spend 12k on models, I can see why Games Workshop will go out of there way to get signed copies of the books, art, and all the extras.

via Games Workshop
http://www.games-workshop.com/gws/catalog/productDetail.jsp?catId=cat440161a&prodId=prod2160196a
Alongside the entire Chapter of Space Marines you'll also receive a signed copy of Codex: Space Marines; a signed copy of Insignium Astartes (the definitive guide to the heraldries and squad markings of the Ultramarines); a full Chapter organisation chart; a breakdown of the composition of each of the 10 companies; a signed art print of the Codex: Space Marines book cover; and a signed art print of Paul Dainton's painting of the Ultramarines assembled for battle.