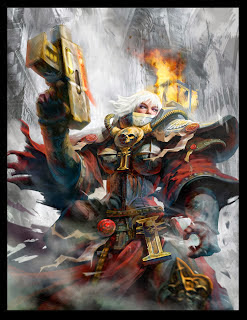 Many of you have already seen that Sister's of Battle are getting a digital codex release, but what you may not have heard..... as its getting left off of scans, is that Blood Angels are also getting an ipad edition this month alongside the Sister's of Battle.

So yes, Sister's of Battle, if you did not have the long dead White Dwarf codex that came out some time ago, you can now get a digital version of it, which it says it includes warlord traits (new? or just BRB?). Exciting stuff, as it will be some time before this is released.

So look forward this month to new digital product releases, which include Sister's of Battle, Blood Angels, How to Paint Citadel Miniatures: Dark Elves, and of course the Warhammer Dark Elves Army Book.

Just incase you are a non-believer, like those from the many forums, here is a link, although it does not show the blood angels release on it. The Blood Angels release is mentioned right below it where the image cuts off. (Ive seen it and since things are being revealed, I can mention it)