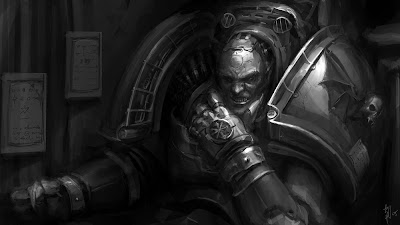 When the Chaos Space Marine codex came out, a lot of us were really hoping for a book that would look much more like the what the Space Marine codex currently does. With Chapter Tactics they way they are for the new codex, a large variety of new armies will start appearing, and collectors of specific chapters are having a great time.

So why was not this treatment given to Chaos Space Marines? Its obviously doable.


I am sure this topic is already fraying the nerves of many readers. However, recent rumors are starting to lead me to thinking that there is a greater plan, and even though we are not getting the Space Marine Treatment with CSM, perhaps it will be better in the long run.

rumors
World Eaters, Thousand Sons, Death Guard, Emperor's Children, Iron Warriors, Alpha Legion, Word Bearers and Night Lords will all get their due treatment and be fleshed out into characterful factions.

These rumors are really starting to lead us into some new directions for our Chaos Space Marines. For example, the Books of the Chaos Gods will include units from both the Chaos Daemons and CSM codices into one supplement. This will give you one supplement to go off of, without the use of allies (thus opening up more allied options).

Now we have also heard through some great sources, that codex supplements will get more complex as time goes on

rumor
These will be more and more complex as time goes on (as will all supplements) and are ordered based around how much they affect the game/core codex, and not based on anything else primarily.

Even though this was to tell us how and when these are coming out, it gives insight into codex supplements really starting to dig in, and give us far more changes or additions to a parent codex, for some possibly very unique ways to play our armies.

So literally in the future, Chaos Space Marines may be able to take Book of Tzeentch, and then take Thousand Sons supplement as an ally. There are just a ton of options (themed or not) here, and in the end would be much more variable in game execution and list building than what we are currently seeing.

Could it have been intentional? Meaning that the plan was to expand upon the codex with supplements when it was released. That Space Marines wanted to be handled differently than CSM, so the plan was later expansions to really dig into each Chaos Legion, with fully developed background and ways to play them.

Or was it that 6th edition was not really tested out yet, and codex supplements was and possibly is, still be tested to see how the customer base likes them? Chaos Space Marines were just the start, and since then, 6th edition has expanded, and GW sees an opportunity that with codex supplements, they can really flesh out an army codex in many different directions.

There is no answer yet, and only the future will reveal with any certainty what Chaos Space Marines will look like in the next couple years. If codex supplements become larger volumes, and we eventually run out of army codices to be released, are codex supplements going to be our future, and expand our game into the the years to come? There really is no need for a new edition, as I can see codex supplements really keeping things moving far into the future.

Its quite possible the future is very bright for CSM's, as larger volumes of Supplements for Chaos Space Marines are still wide open to the possibilities of future releases.
9/11/2013
Natfka
40k, 6th Edition, Chaos Space Marines, Rumors, Warhammer 40k