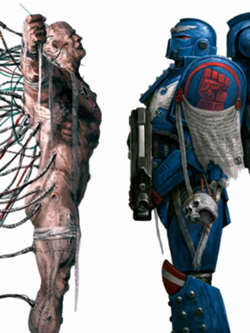 I have spent quite a bit of time with the Space Marine codex since its release. So when I go back to another codex to start drawing up lists for my games this weekend, I keep thinking back to all the options and flexibility of the new Space Marine codex. Quite literally, there is very few codices with just so many different unit types.


"He who dies with the most toys wins"
What this does is give a Space Marine player just a ton of options and excuse the word, "toys" to play with. You just have so many different options. The HQ section of units choices, starts on page 160, and doesnt even end until 166. There are 4 dedicated transports, not including Land Raiders, which of course can also fit the role for some units, so make that 7 dedicated transports. There are 12 heavy support options. I mean whoa, if you really want to spend some time with lots of toys, this an army for you.

Not only do you have just tons of options as a marine player, but add in chapter tactics, and the options simply multiply. You have a good large number of ally options as well, and the best part of it all, the new codex has a lot of strong options to build with.

Its really saddening to actually open up another codex and start digging through it. I was list building for a Chaos Space Marine list, and I do not even think there is half the unit options available. OK, here is literally the count, and its not half.

So while these numbers appear close at first hand, the usefulness of each unit in the Space Marine codex is much higher, and chapter tactics adds a whole array of options and other choices. Now I know there is some flexibility in the FOC in both armies, but when I go back to other codices, I just feel like I am missing out on some of the variability of the marines.

Now that the Space Marines are out, I do think there is one codex though that I feel can compete in this exercise, and that the Imperial Guard. Just the tank sections tend to overwhelm, however, for the sake of our sanity, its important to stick to the 6th edition codices.
9/18/2013
Natfka
40k, 6th Edition, Space Marines, Warhammer 40k