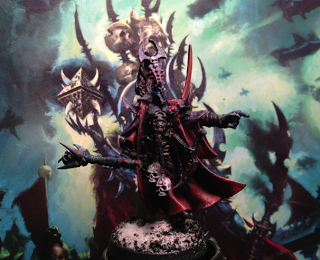 I try very hard to keep up on my inbox, and get responses to everyone that writes in, however, sometimes I fall a little behind. This week, I thought I would try and catch up and answer some of these questions with an article, since I thought readers might benefit from seeing these online.

The pic above is my Asdrubael Vect Conversion I took to Valhalla with me.

So here are some letters

Letter 1
Natfka,
Have you noticed that they gave Dreadnoughts power fists? There is nothing in the rules saying anything to nullify the initiative modifier. Do you know of anyone that has gotten a response from GW about this subject?

Please keep up the hard work. I visit your blog every morning while I drink my pot of coffee.

Many thanks,
name removed

Answer
Dreadnoughts are seeing more power fists listings, however in 6th edition dreadnoughts are not reduced to initiative step 1 when wielding power fists, or any weapon with the "unwieldy" special rule attached to it.

Unwieldy page 43 BRB
A model attacking with a this weapon does so at initiative step 1, unless its a monstrous creature or a walker.


Letter 2
Hey Man just curious on what I could do to get you to possibly do a posting on a big Horus Heresy event we will be putting on in January.

Over at Heresy30k.com we have started to organize a nationwide event similar to what they did in Nottingham.

Here's one of our members blogs that references it.  http://apocalypse40k.blogspot.com/2013/09/horus-heresy-betrayal-weekend-usa.html?m=1

We are still nailing down the details but we are pretty excited.

Thanks man, I'm a loyal follower of your page.  I help run a Gamestore north of Seattle and your blog helps me keep informed.

Answer
There you go, Good luck with the event. I went over through the link, and it looks like a lot of fun.


Letter 3
Just found your blogs and YouTube. I'm just getting back into gaming and really like your posts. Guess just wanted to pick your thoughts on the dark eldar I have a force about 3,000 pts worth of models. Do or can you still play competitively with the DE ? I do have a large Eldar force but never tried to ally with them guess, I should look into that and really you brought that to my mind. Around
here most play Tau games are at 1850pts

and have  almost run me back out of wanting to play, and the new Marines should bring all them back. Any rumors for DE. And last I guess, do or well you be posting ( please tell me you well be ) Dark Eldar tactics or even battle reports against Tau and Space Marines. Any advice or directions to other sights on trying to play DE.

To me Dark Eldar have awesome fluff and the best looking models guess that's why I have so many..
Thanks
name removed
( Tennessee )

Answer
I tend to find that if Dark Eldar stick to what they are good at, they play competitively just fine. I have a quite sick 1750 list that I do not play much (its just not fun for the opponent).

I also find that Dark Eldar work great with Eldar. A few Wave Serpents, and Wraithguard with D-Sythes is where I like it. Of course an Iyanden Autarch can wreck havoc upon the enemy as well and can even compete with Archons on just how deadly he is.

There are no Dark Eldar rumors yet, and I don't expect any releases for them until 2015 at the earliest.

As for suggestions, Splinter Cannons are a great advantage for Dark Eldar, as is their speed. I tend to use mine in Trueborn Squads in Venoms. Don't forget about blowing up vehicles though, as Dark Eldar can fall short there, but you can always look to allies for that. I personally use a lot of Raiders, and all my infantry are equipped with splinter cannons. So yes, I will continue to do more tactica for Dark Eldar as I get the chance to delve into it more.

Letter 4
Quick question for you... Any idea where to pick up gravguns for my White Scar bikes?  I need 6, lol.

Answer
They are not easy to get a hold of right now. My first thoughts are customizing the guns to make them. Perhaps this is something to take to the site for suggestions.

I hope that we will be able to buy grav guns soon in similar packs to what we have for melta and plasma guns.
9/15/2013
Natfka
40k, 6th Edition, Warhammer 40k