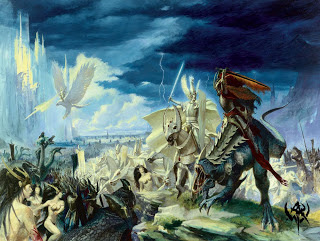 More and more Dark Elf sightings are being reported, and there is an abundance of Dark Elves are coming in October. So what is the latest that has been seen?


Please remember that while I believe these are fact, they are still rumors until we get something official.

via Last Avenger over on the Bols Lounge
1) NEW Plastic Dark Elf Warrior Box(Makes Spearmen, swordsmen, & crossbowmen)
The new Warriors look quite different to me. But then again I am a big geek that notices stuff like that. They have cloaks that come down their back and all the helmets don't cover the eyes any more.
The cloaks hang down from underneath the shoulder armor and cover the back of the chain mail. It definitely is new for them but it looks really cool. The Druchii warriors also have shoulder armor. It makes them look simply awesome. The skull embossed on their shields looks great too.
The Warriors, Black Guard, and Dark Riders all have cloaks. None of them appear to have face coverings.
It does not appear that any of the banners have designs sculpted onto them. The pictures we have of the warriors show 2 regiments, one armed with swords and shields and one armed with spears and shield. Our source tell us that they will make crossbows but we don't have a picture of them.

2) NEW PLastic Dark Riders/Warlocks
Warlocks appear to have one hand weapon
The warlocks are bare chested, and the weapons look mundane...aka not glowing. They look like large jagged daggers. They are held in reverse grips which looks pretty slick. The warlock champions eyes are glowing which IMO hints at some magical abilities.
The Warriors, Black Guard, and Dark Riders all have cloaks. None of them appear to have face coverings.
The Dark Riders are very cool looking. Sleek looking horses with only a bit of armor. All of the Riders are hunched over in the saddle to give the illusion of speeding fast cav. The helmets appear to be open faced and they are armed with spears in the picture I have, once again that doesn't mean they wont get crossbows (in the pictures we have they are in the back ground behind the Warlocks).
There does not appear to be a command group for the Warlocks, only a unit champion.

3) NEW Plastic Blackguard/Executioners
The Warriors, Black Guard, and Dark Riders all have cloaks. None of them appear to have face coverings. The Executioners appear to have skull faced helms. The theme to me appears to be a more sinister version of their High Elf bretheren. The plate armor has very spiked and jagged edges. The style will still fit well with the Shades and Reaper but next to these new models they will look very dated.
-Black Guard look very stalwart with large halberds and high helms with 3 spikes on each side with a flowing plume on top. Their armor is black trimmed in gold and they have dark purple cloaks. The unit champion is holding a sword by the hilt with the blade planted in the ground. Musician is a drummer.
-The executioners have what look like skull helms, and their armor is a brighter silver than the Black Guard. Their tunics are red in color and the Draiches are all held on the left hand side of their bodies (their left our right). They look very cool ranked up.
The Executioner champ is armed with an axe and is holding the decapitated head of a High Elf. Pretty dang cool.

4) NEW Plastic Coldone Chariot/Scroungerunner(Pulled by horses)
The new chariot crew is armed with spears and what looks to be a large crossbow or bolt thrower on the chariot.
For the Scroungerunner charoit the crew look similar to Corsairs. The passenger shooting the crossbow/boltthrower has what appears to be a sea dragon cloak on. There are reins but they look like just normal black leather. The horses look awesome and angry. Both are black in color with red eyes. The chariot only has one wheel that is centered on the back part. Sounds stupid, looks cool. And as usual nasty spikes and blades al
And yes the Cold Ones on the chariot match the current Cold One Knights.


5) NEW Plastic Cauldron of Blood/Blood Throne(This model is AMAZING)
The Cauldron of Blood/Blood Throne look very cool. If you are a fan of the newer larger models GW has been putting out for WHFB you will really dig it. It is a bit toned down compared to the Empire Celestial Hurricanum/Luminark of Hysh and has blades and hooks on it to make it very sinister and Dark Elf.
The Cauldron of Blood/Blood Throne are on a bigger base than the chariot base.
Yes the Cauldron and the Blood throne both have 6 wheels. They are on the same chassis, just with different stuff on the altar. I just noticed that the Witch Elves on Blood Throne have metal masks that cover the front of their face with the exception of their chin and mouth area and of course their eyes.
Ok and now to answer the Medusa question: She has the lower body of a snake and it appears there are other snakes on her base. The right side of her torso is bare, including her breast. In her right hand she is holding a spear. She has armor over her left breast and has a nasty looking clawed gauntlet on her hand. Her mouth is agape and she has snakes for hair. There is also a significant amount of blood on the model.

6) NEW Plastic Hydra/Kraken
About Hydra:It looks bigger and beefier.
Yes the Hydra does have 2 handlers.
-The Kraken has 5 heads/fanged maws. The have spines and scales with smooth neck and belly flesh. Scales are painted a Dark Grey with the softer flesh painted blue. Looks awesome.
The Kraken doesn't have tentacles, it has four legs with webbed appendages ending in claws and it also has a tail.
Yes the Kraken has multiple heads. From the pic it looks like there is one main head with eyes and the other four necks end with fanged maws. Very cool looking. It may sound stupid to people as it is walking but wait until the picture comes out before passing judgement.
You have to clear your head of any preconceived notions of what a Kraken is or looks like. Because lets face it, an 8 legged octopus creature flopping around on land would just not look right. It has 4 limbs that end in webbed feet with claws on them. It also has 5 heads. The main head has beady little eyes right above the mouth. The lower jaw on the main head extends kind of like an octopus tentacle but with teeth on it. The other heads end in an mouth with teeth and 4 claws around the head that look to facilitate grabbing their next meal.

7) NEW Plastic Witch Elf box
-The pictures we have of the Witch Elves has them with two hand weapons.
The witches are also sporting thigh high boots and are very dynamic with their poses. I wonder how much of a pain in the butt it will be to get them to rank up.
The Witch Elves look great. No mowhawks or anything like that. Long flowing hair, thigh high black boots and red loincloths and for lack of a better terms bras. They appear to have open mouths so lord only knows what they are saying before they come in and hack my poor High Elves to bits.
There appears to be a command group for the Witch Elves.

Crone Hellebron?
-Apparently one of the pics we have is Crone Hellebron. She is a little more armored up than a normal WE. She has a sword and a small blade (I am thinking Deathsword and Parrying Blade). She definitely has the big hair like in her artwork in the current army book.She looks young like a regular WE. She has a a bit more clothing, but not much. She has a gold mask covering her face that extends upwards in a crown like fashion. Both arms are raised towards the sky.
9/14/2013
Natfka
Dark Elves, Rumors, Warhammer Fantasy