Home » News Headlines » Rumors » A New Level of Idiocy and Wearing it Like A Badge: Fake Tyranid Rumors from 4Chan

A New Level of Idiocy and Wearing it Like A Badge: Fake Tyranid Rumors from 4Chan 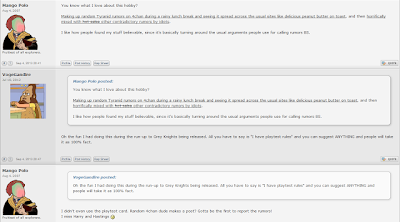 A lot of these were making the rounds all over the web, and so when they were caught it's time to get the word out. The rumors were posted up on 4chan, and literally were on every forum blog and other site in minutes.


A big thanks to Zion of Talkwargaming for catching this, and linking us up the pic above for readers here on Faeit 212.

Rumors are rumors, just as much as you can't cure stupid. Just remember that all rumors require salt.

These are the Fake Rumors
via 4Chan (obviously from Mango Polo)
Crawling Plague (named Venomthrope), Finecast
- Like the other named tyranids is taken as a brood upgrade.
- Three rows of vents on its back, tail is much longer and coils itself around a piece of scenery. Mouth tendrils are shorter and spread open around its mouth like it's trying to spit out something, with liquid dripping out of it.
- Torrent weapon, AP- Poison 4+. Gimmick is on a 3+ place a marker anywhere on where you placed the template. Following turn place the small end of the flamer template on the marker and aim it in any direction, roll again on 4+ every subsequent turn to see if it stays on the field.
- Grants stealth to all models within 6" and shrouding to itself. Venomthropes create 5+ cover, so they synergize.
- It Lurks in the Mists: Special deployment gimmick instead of deploying on the board, at the start of any movement phase except the first you can deploy the Crawling Plague within 6" of any venomthrope.
- Mutation from the new Hive Fleet Karkinos, which is specialized in toxic weaponry and the usage of venomthropes.

Tyranid Prime, plastic clamshell
- Larger Warrior, head crest has four prongs, additional shoulder plates that interlock down over part of the chest, armor in general is sharper and extends farther out with a slight upward curve. Looks like you could impale a guardsman on its back.
- On foot, devourer and scything talons, dead easy to switch out components with Warriors and Raveners.
- Details of the fluff are quite a bit different. The Prime is designed as a perfect hunter, created to fit any battlefield and seek out and eliminate enemy commanders while supported by evolved broods in this regard.
- Apex Brood: The Prime can take a single retinue of "Apex" Warriors, Raveners or Shrikes. They receive T/WS/BS +1 and the Prime auto passes LOS! rolls while attached to the Apex Brood. Somewhat more expensive than their normal counterparts (+5 to +10 pt each depending on the creature)
- No more +1WS/BS when attached to regular warriors, that's replaced by the retinue.
- Hunter-Killer: Enemy characters cannot refuse challenges from the Prime.