Privateer Press has some new releases on the table for both Hordes and Warmachine. Of them, I am really liking the Obstructors for Warmachine. Check out the following releases.

via Privateer Press
http://privateerpress.com/
Razorwing griffons plunge into battle with the piercing shrieks of birds of prey, diving brutally into enemy formations. Flying just a few feet above the ground, they move like threshers across crops of wheat. The griffons use their sharp-edged blades to slash through ranks of infantry, leaving a bloody trail of the dead and dying to mark their passage. 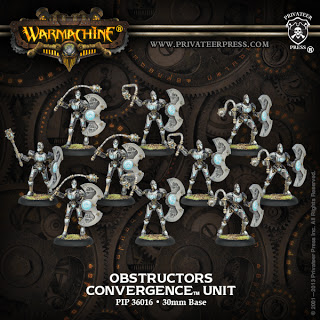 Having achieved the first step in their greater journey among the Convergence by having their souls installed in intricate clockwork vessels, obstructors know neither fatigue nor pain. In battle their shields interlock through an intricate mechanism of gears to present an unbreakable steel wall to their enemies. They serve as the primary cogs around which the greater Convergence army is ordered. 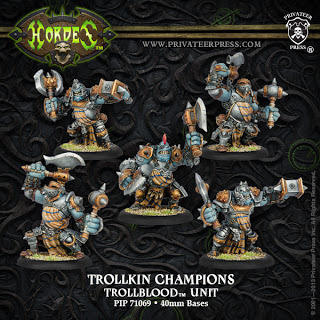 The champions are hardened trollkin veterans, rising as the great heroes of their kriels. A tight bond links them to one another, an awareness that theirs is a greater destiny. They formalize these ties with the kulgat blood oath, learning to draw strength from their brothers and fight with seamless precision side by side. They distinguish themselves on the front line, hacking into enemies with a weapon in each hand, inflicting grievous wounds.