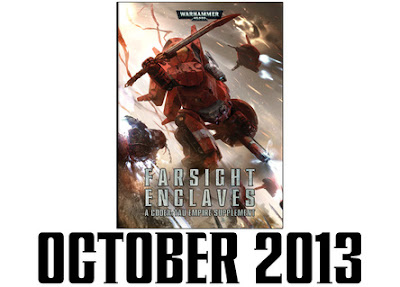 Those of you like me, that are waiting patiently for time to pass on what is now two codex supplements to reach print copy, can breathe a sigh of relief. At least one of the two current codex supplements that have been released digitally, Farsight, is now official for an October release.


Here is what can be found on Games Workshops website regarding the release.

via Games Workshop on their site
Farsight Enclaves: A Codex Tau Empire Supplement
Coming soon! This book will be released in October 2013.

Now that we know this is coming, there are now two more in print that we are waiting for. The Black Legion, which has been released digitally, and White Scars, which is rumored to be the first Space Marine codex supplement. Of the two, White Scars seems very certain to be right on the horizon.

A huge thanks to the readers here on this site, that emailed me in links,
Thanks to both Eddie who was first and Jon who followed shortly there after.
9/15/2013
Natfka
40k, 6th Edition, News Headlines, Warhammer 40k