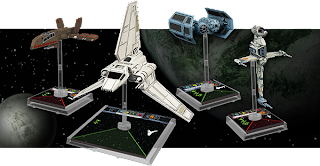 Fantasy Flight Games is just releasing 4 new kits for X-Wing, its dramatic space battle game. These include the Lambada Class Shuttle,HWK- 290, B-Wing, and Tie Bomber. The popularity of this game seems to be on the increase, so it seemed only natural to cover its new release. 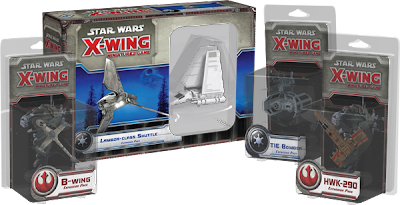 The Lambda-class Shuttle, HWK-290, B-Wing, and TIE Bomber Expansion Packs each feature a detailed model, faithfully rendered at 1/270 scale, as well as a maneuver dial, and all the ship cards, upgrades, and tokens you need to make these starships a dynamic part of your X-Wing battles.
The game’s flexible squad building rules ensure that every X-Wing expansion introduces a wealth of tactical options, but these four new starship expansions take your squad building options to a new, all-time high!

When the X-Wing Core Set was released in tandem with the first four starfighter expansions, competitive players quickly learned how to optimize their strategies by partnering ships and pilots that gained power as they flew together in close formation. The next four starship expansions, which included the Millennium Falcon™ and Slave I™, blasted the larger metagame wide open. These large, powerful ships functioned just as well flying on their own as they did while flying in formation, and they promoted a versatility and diversity within the game that was reflected at every level, from casual play to the game’s Regional Championship season to the recent North American Championship tournament at Gen Con Indy 2013.