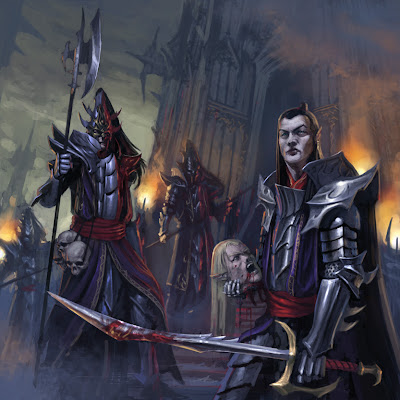 Dark Elf sightings are starting to increase, and I have collected several, including a pricing list, which shows 7 plastic box sets.


Please remember that these are rumors, and that we will not know anything for sure until the White Dwarf gets closer. All of these sightings are from Warseer.

via Lion275
The executioner swords look similar but obviously are improved with the CAD design.
The Black Guard halberds look a bit beefier in the blade part.
There are designs on the trimming and edges of some of the armor for the Black Guard and Executioners

via scoutbike
I spoke to a GW manager today and he said he wont know anything about the boxes officially until next week, BUT HE HAS SEEN THE DARK ELF ARMY BOOK COVER. So this is happening for sure at least. I know that's no surprise to us, but it was nice to get a confirmation.
He says the cover is very similar to the High Elf army book cover, except with a Dark Elf there instead. I didnt press him on it as to be honest, it's hardly relevant at this stage, but we know for sure this is all coming in October for sure

GW prices might be higher, since reseller usually discount their stuff, and there are alot of stuff missing (like the army book for example), so this might be just guesswork by them based on rumours.