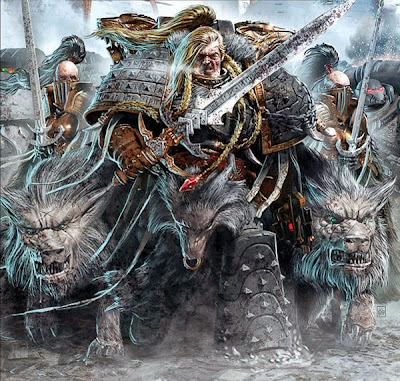 This week was the lead in to Games Day UK, and of course ended in the Pre-Orders of Dark Elves for Warhammer Fantasy. It was a great week, including breaking information that Space Wolves are coming, Thousand Sons, more Book of Tzeentch, and Ravenguard rumor bits. Take a look, this week was not disappointing.


Each week, Faeit's Rumor Tarot will take a look at what rumors came up among the myriad of games that were covered here on Faeit 212. On occasion I will be breaking any weekend developments that were discovered or revealed, so keep a watch out, for on the Faeit's Tarot, you never know what secrets may be revealed. If you think you may have missed something, here is your chance to catch up. 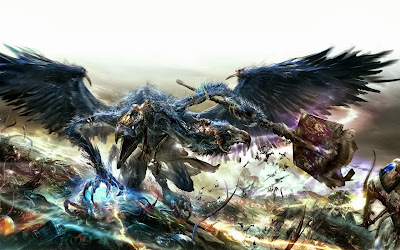 A great source here on Faeit 212 chimed in on one of the rumors we had earlier the week, (which is posted further down the page here), and of course added in some extra good stuff to look forward to. Space Wolves, Thousand Sons, and more.

via an anonymous source here on Faeit 212 ****
http://natfka.blogspot.com/2013/09/space-wolves-thousand-sons-raven-guard.html
Iron Hands rumors we had Is total bogus.
Not one pen has been lifted on that project yet. Total speculation on part of the original source.

Current supplements being worked on is raven guard, book of tzeench and thousand sons (2 different supplements). And before people get up in arms about needing countless books to play 1K Sons that's not the case.

They're very different books. One is Tzeench incursion forces that meld daemons and CSMs, and the other focuses on rubric marines, sorcerer sergeant upgrades and rubric terminators alongside unique wargear and vehicle upgrades. 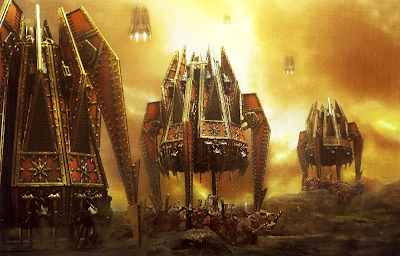 via an anonymous source on Faeit 212 ****
http://natfka.blogspot.com/2013/09/a-new-dreadclaw-by-summer-and-its.html
Moulds age. Eventually Forgeworld models need to be retired. The dreadclaw was a pain to cast and build with lots of errors.

Dreadclaw by the summer, new Drop Pod by Christmas.

Sisters of Battle and Blood Angels 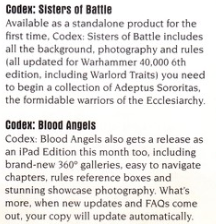 Pic is from the latest White Dwarf via a reader here on Faeit 212 ***** (obviously not a rumor)
Sisters of Battle and Blood Angels getting digital codex releases later this month. This is definitely coming, as revealed in the White Dwarf, and is excellent news for those Sisters of Battle players just dying to get any sort of news that their codex will not be disappearing. (A real fear since the Black Templar wrap up into the Space Marine codex).

The article discussing this from earlier in the week.
http://natfka.blogspot.com/2013/09/sisters-of-battle-and-blood-angel.html 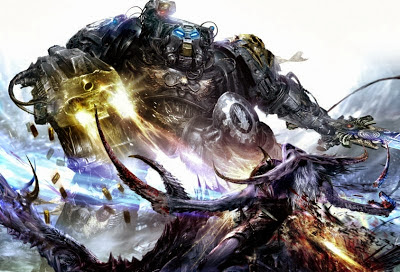 This rumor was from earlier in the week, and one of our rumor sources came in and very much said that this is not happening. I figured I would include it in the rumor round up, because it shows the evolution of rumors and how we see them as the week progresses.

via an anonymous source on Faeit 212 *
http://natfka.blogspot.com/2013/09/iron-hands-codex-supplement-rumored.html
(please extra salt on this one, the source was skeptical of the information)
I've been given a slight nudge towards the Iron Hands Supp, might be nothing, there was a hint towards the special issue wargear that they would have access too,

A Servo-Harness for Captain/CM, also gaining the rules of Blessing of the Omnissiah, though not gaining the chapter trait for the 1+, letting techmarines and MoF still have that little niche. Weither it can be used with Terminator Armour is still up in the air.

A standard upgrade is also being added to the choices for characters, which is a 1+ to FnP, something about robotic limbs.

Also Techmarine's may be an upgrade to Tactical Squads/Purchased per Tactical Squad, not sure which the hint was very very held-back. 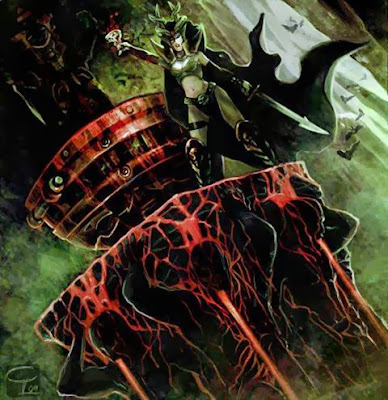 We have been speaking about a 2 month Dark Elf release now for a couple weeks, and now that it is coming true, the community (except those that come to this site) are in shock. Here is another source on Warseer jumping in to say the same thing.

via zhangyi on Warseer ***
http://natfka.blogspot.com/2013/09/dark-elves-and-innocence-40k-skirmish.html
so it's clear now, that DE will be released during two months. October we will have warrior, witch elves, blood throne, Kharibdyss (dont know what is it), and a plastic shadowblade.
as we can see GW has put bg, chariot and dark riders to next month along with innocence(the 40K table game,i'm 95% certain that it will be in November). for good reason we can split our money to two months. that's really kind.

via Dark Elves on Facebook ***
http://natfka.blogspot.com/2013/09/dark-elves-confirmed-2nd-wave-in.html
There are pics shown on this facebook page, giving us glimpses of the new models.
https://www.facebook.com/pages/Dark-Elves/152899918152241

Dark Elves Boxes will be 3 in November.
One. executioners and black guard will be in the same box.
Two. dark riders with optional riders will warlocks

Three. the option will chariot with Cold One or horses one would be a heavy chariot and the other fast 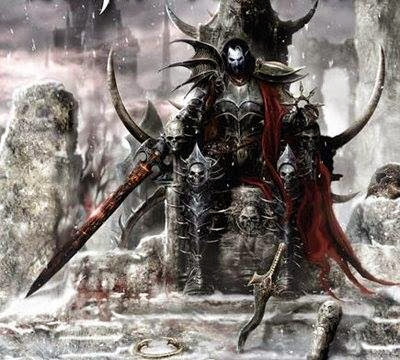 Information comes in huge flurries once the White Dwarf is released, and these are the results of that. Reading the White Dwarf and extrapolating the rules from there. Dark Elves are here, and now that we are a week out from seeing the army book, rules are what most of us are now waiting for.

via Scizorsfury on Warseer ***
http://natfka.blogspot.com/2013/09/first-it-was-leaked-pics-now-some-rules.html
The sisters of slaughter are rares: enemies is base contact with them lose rank bonuses.

Hydras are specials can upgrade to get a strength 4 breath attack, no regen but can regrow heads (recover lost wounds) just like the slann can with his discipline.

The kraken thing has a special ability that triggers when all 5 of its attacks hits ( gets an extra attack that inflicts additional hits) has a scaly skin save and causes terror. Enemy models in base contact must re roll successful leadership tests. Both use the monster and handler rules.

They have 2 signature spells just like high magic. One of the spells goes off on a 8+ and grants a unit +1 strength and then you gain D3 power dice but if you gain 3 power dice this way the wizard suffers a wound with no saves allowed.

The army has always strikes first.

Murderous Prowless: models with this rule re roll 1s when rolling to wound.

Wizards casting Dark Magic add plus 1 to their casting attempts.

edit via Scizorsfury
I had the sisters rule mixed up with the kraken monster. They take away rank bonuses

via JeffKent at Kiwi Hammer ***

War Hydra is 180 points including fiery roar. Interesting the WD description talks about a lashing tail and poisoned tipped claws (possible upgrades IMO). The WD describes the War Hydra being able to regain wounds during the game, and then goes on to say its like an improved regeneration rule.

Dreadspears are 9ppm with Shield and spear, whilst rptxbows are 12ppm.

Witchelves also have Frenzy, and Poisoned attacks ontop of ASF, Hatred (HE) and MP.
The frenzy is increased to +2 attacks with the CoB apparently (unconfirmed)

A High Beastlord has the ability to boost nearby monster units. Unsure of how. Presumably you can still get a beastlord hero as the High beastlord is a lord option.

The Medusa can be taken on a mount (bloodwrack throne) or on foot (er tail)
On foot it is 90ppm and is selected from the rare option, has some sort of shooting attack with kb

I am surprised and happy to see the return of points values in WD battle reports  :mrgreen:

Edit: Hellbron is included in the CoB model. Yes Plastic Hellbron, alongside a Bloodwrack Medussa, and a Hag...

I forgot to add, I've had confirmation that Black Guard are on stock run down. That means only one thing...

The WD also supports this as it mentions several times the "total redesign" of the Dark Elves, with only the CoK and Corsairs being 'sacred'

More via Druchii.net ****
http://natfka.blogspot.com/2013/09/more-dark-elf-rules-sisters-of.html
The Hydra btw lost its Regeneration. Has the ability to get Lifepoints back. It has d3 attacks + 1 attack for each lifepoint and will cost 160 points. (Without breath)

cauldron of blood will have a +5 Ward for the Unit its placed inside. It also gives Frenzy (Rage or what ever it is in english) if the Unit already has it, they will get 2 attackes instead of one.
It also gives something in a range of 6" around the CoB. But forgot what it is sorry.

The Medusa will have an ability to force Initative tests with models in base contact. And it has Killing blow as a Range attack. I think it was 3 Attacks.

No Rumors Beyond this Point
I am rating what I personally think of the rumors (not the source). This is based off of behind the scenes knowledge, what different sources are saying, and general logic and guesswork. It goes like this

1 Star. Way out in left field, and I feel that these are probably just wild speculation or made up. (think whoa, where the hell did this come from, and generally posted up because its fun, or Natfka was bored)
9/29/2013
Natfka
Faeit's Rumor Tarot, Rumors