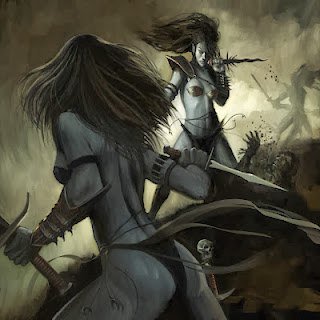 More Dark Elf rules are floating around and are pouring out of the latest White Dwarf. So there is still some room for misinterpretations of what is said, but these give a very solid idea of what we will see. Take a closer look at what is being reported by a couple different people.


Please remember that these are still considered rumors until we get the magazine and can see for ourselves.

via Geruchteckuche
http://www.magabotato.de/tabletop/item/geruechtekueche-dunkelelfen-erste-bilder
Sisters of Slaughter: WS 6, I 6, A 2 and a 4++ ward.

War Hydra is 180 points including fiery roar. Interesting the WD description talks about a lashing tail and poisoned tipped claws (possible upgrades IMO). The WD describes the War Hydra being able to regain wounds during the game, and then goes on to say its like an improved regeneration rule.

Dreadspears are 9ppm with Shield and spear, whilst rptxbows are 12ppm.

Witchelves also have Frenzy, and Poisoned attacks ontop of ASF, Hatred (HE) and MP.
The frenzy is increased to +2 attacks with the CoB apparently (unconfirmed)

A High Beastlord has the ability to boost nearby monster units. Unsure of how. Presumably you can still get a beastlord hero as the High beastlord is a lord option.

The Medusa can be taken on a mount (bloodwrack throne) or on foot (er tail)
On foot it is 90ppm and is selected from the rare option, has some sort of shooting attack with kb

I am surprised and happy to see the return of points values in WD battle reports  :mrgreen:

Edit: Hellbron is included in the CoB model. Yes Plastic Hellbron, alongside a Bloodwrack Medussa, and a Hag...

I forgot to add, I've had confirmation that Black Guard are on stock run down. That means only one thing...


The WD also supports this as it mentions several times the "total redesign" of the Dark Elves, with only the CoK and Corsairs being 'sacred'


More via Druchii.net
The Hydra btw lost its Regeneration. Has the ability to get Lifepoints back. It has d3 attacks + 1 attack for each lifepoint and will cost 160 points. (Without breath)

cauldron of blood will have a +5 Ward for the Unit its placed inside. It also gives Frenzy (Rage or what ever it is in english) if the Unit already has it, they will get 2 attackes instead of one.
It also gives something in a range of 6" around the CoB. But forgot what it is sorry.

The Medusa will have an ability to force Initative tests with models in base contact. And it has Killing blow as a Range attack. I think it was 3 Attacks.