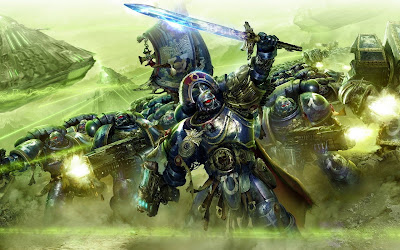 When it comes down to tactical flexibility on the tabletop, there is no one that compares to the Ultramarines. So whether an ally or your primary detachment, Ultramarines have special abilities that at first I was a little disappointed in, but if you really take a closer look at their chapter tactics and special characters, there is a wealth of good solid units to take advantage of.


Chapter Tactics
Combat Doctrines. You can only use each one of these once, and only one per turn. However they are flexible, because you get to choose which one to use at the start of your turn.

Tactical Doctrine: All units in this detachment re-roll ones to hit in the shooting phase. Tactical squads get to re-roll any misses.

Assault Doctrine: All units can re-roll their charge range. Assault squads, attack bike squads, and bike squads instead have the fleet special rule

Devastator Doctrine
Models can re-roll snap shots, including overwatch. Devastators get relentless unless disembarking from a transport.

At first glance I did not like these. However since you only have 5-7 rounds of play, you will be using these as an Ultramarine player, and on average half of the game when you need them most, you will have a doctrine in play.

Marneus Calgar
Marneus Calgar is expensive in points, and many people would say even too expensive. However, he gives the power to be able to fail or pass any morale check. (this is huge having faced it before). Not to mention that he allows you to choose a single combat doctrine and use it twice during the game. You do not need to declare which one it will be, until you use it.

Adding Marneus to your list, makes Ultramarines even more flexible, to the point where it feels sneaky to be able to pass and fail morale checks on a whim. I can't tell you the number of times I have seen morale failures at the wrong time, or when a failure would reposition a squad that was getting hammered. (btw a great way to break being pinned is to fail a morale check if you took the casualties, run-regroup-good to go.

Sicarius
One tactical squad gets an additional rule at no cost, Counter-attack, Infiltrate, Scout, or tank hunters. Just so so, but in the right player's hands, effective. All friendly units with Ultramarines chapter tactics use his leadership for morale or pinning tests. (another just so so ability)

He also adds +1 to reserve rolls. Now add this to Tigurius, and you have a combo that will allow you to completely control your reserves.

Chief Librarian Tigurius
He gets divination!. Wow. He is a level 3 Psyker. He can also re-roll any or all the dice when rolling your psychic powers. Talk about control and adding the flexibility of your list.

Now take a look at this, he also allows reserve rolls to be re-rolled, even if you passed them. Combined with Sicarius complete control of reserves is achieved.

Chaplain Cassius
Adds the usual chaplin abilities, but is toughness 6, has a master crafted combi flamer with poisoned (2+) rounds. Did I mention he was toughness 6 with feel no pain?

While he is not the army effecting character that you see the other Ultramarines Characters are, he is still a very cool character.

Sergeant Telion and Sergeant Chronus
While their abilities like Cassius are not wide, each fills a specific role on the tabletop and are not in the HQ section.

Ultramarines literally make an already flexible Space Marine army, very tactical on the tabletop. While their abilities and special rules are not as eye catching as some of the other chapters, Ultramarines  still make for a strong and powerful choice out of the new Space Marine codex.