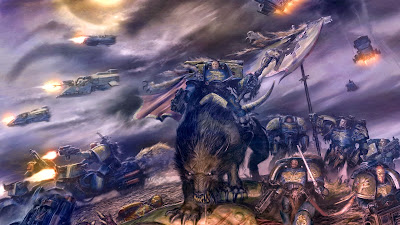 A few days back there was a very salty rumor that (the rumor even said so), about an Iron Hands codex supplement and its rules. Well, now you can even throw more salt on it, as someone has come in to check that rumor off our lists, and indeed let us know what is and what is not being worked on.

Here is the rumor in question regarding the Iron Hands.
http://natfka.blogspot.com/2013/09/iron-hands-codex-supplement-rumored.html

Please remember that even though this is a very solid piece of information, its still classified as a rumor as nothing official has been announced. Also note, that this is not everything being worked on, or that is ready to go.

via an anonymous source here on Faeit 212
Iron Hands rumors we had Is total bogus.
Not one pen has been lifted on that project yet. Total speculation on part of the original source.

Current supplements being worked on is raven guard, book of tzeench and thousand sons (2 different supplements). And before people get up in arms about needing countless books to play 1K Sons that's not the case.

They're very different books. One is Tzeench incursion forces that meld daemons and CSMs, and the other focuses on rubric marines, sorcerer sergeant upgrades and rubric terminators alongside unique wargear and vehicle upgrades.