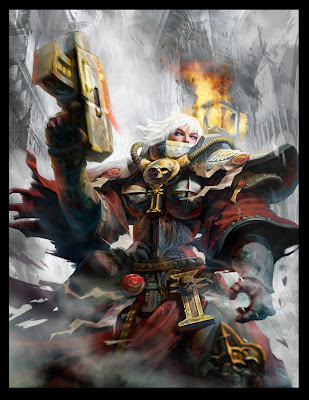 The rumors are in, and Best_Pone is a good source of information. This time he is chiming in on the Sisters of Battle getting a digital codex release. Now this is very likely going to be the old White Dwarf version that was released some time ago, but still very cool. It would be nice to see the Sisters of Battle return to the tabletop.

via Best_Pone on Warseer
Codex: Sisters of Battle
An interesting tidbit I overheard being discussed recently is that Sisters of Battle are getting a digital codex release soon. Unfortunately, I'm still in the dark as to if there will be a physical codex release, or whether this is new material or just a repackaging of the current list.

Comments from Neko
I'm also expecting a digital release of the current list. A physical codex with new rules would most likely be part of a full wave release, complete with new plastic Sisters, and 90% of the potential customers dying from shock.
9/07/2013
Natfka
40k, 6th Edition, Rumors, Sisters of Battle, Warhammer 40k