All the Major Traitor Legions Will Be Getting Supplements 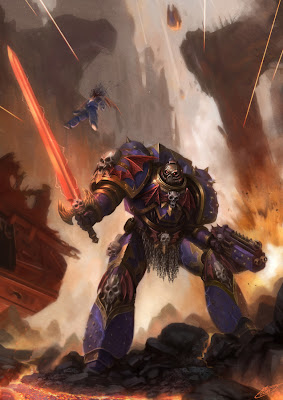 There are  lot Chaos Space Marine supplements in the works, and apparently they are all being worked on simultaneously. Lately we have been hearing rumors about a "Book" for each Chaos God, but this goes into some of the thinking behind the releases, and for each of the major Traitorous Legions.

via an Anonymous Source (obviously a good source) from Faeit 212
Chaos Space Marines are getting supplements for all of the major traitor legions.

These will be more and more complex as time goes on (as will all supplements) and are ordered based around how much they affect the game/core codex, and not based on anything else primarily.

A lot of the supplements, while they may be "labours of love" as has been thrown around the Internet, are all simultaneously in the works and get reworked as GW receives feedback from their initial foyers into the realm of supplements.

World Eaters, Thousand Sons, Death Guard, Emperor's Children, Iron Warriors, Alpha Legion, Word Bearers and Night Lords will all get their due treatment and be fleshed out into characterful factions.

An issue that exists with them though is forcing people to play a certain way through restrictions.  While granted, if you're picking "World Eaters" chances are you want a close combat army, but creating a supplement that denies your havoc squads heavy weapons (for example, not an actual rules quote) might send some schools of players up the wall who already have their 5 World Eater White space marines with autocannons painted up.

Supplements need to promote a play style, while not locking you out of another (even Farsight Enclave can use Ethereals for instance).

A lot of the mono-god chaos Legions are very bottle necked into hyper-focused lists which may or may not perform well, and releasing a supplement that makes your army so narrow that it is not competitive (despite being "fluffy") is not the ideal.  Likewise, if you try to compensate for these deficiencies by (for example, again not an actual rules rumor) making said world eaters so amazing in close combat, or able to deliver themselves to close combat effortlessly, that they become cherry picked as allies to go with something devastating and long range you in turn defeat the purpose of the supplement entirely and have just added in a powerful unit to something else entirely.

So keep in mind that it is coming, it's very much so desired by essentially everyone, but it's being handled carefully.

Warzones however we're going to start seeing a lot more of, which will coincide with codex launches or between them to bridge codexes together (expect one for Tyranids and Ultramarines).