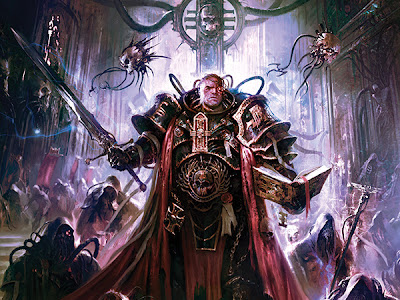 The Dark Heresy 2nd edition is in its beta right now. Its being extended as the guys over at Fantasy Flight Games have been listening to the input from the beta, and are making some serous changes. So check it out, and if you are interested in the game follow the link below for even more information about the new edition of Dark Heresy.

via Fantasy Flight Games
Last week, we announced on the Dark Heresy Second Edition beta forums that we will be extending the beta process. Over the past six weeks, we have been following the discussions in our forums, and reading the in-depth feedback that you have submitted. Because of your input, we are making significant changes to Dark Heresy Second Edition. This is an excellent example of how important the beta process is, and how much we value your involvement.

While the upcoming update will fully detail all of the changes to Dark Heresy Second Edition, a brief overview of some of the changes is outlined below:

Weapons and Combat rules, as well as the Skills and Talents selection and usage will be made more consistent with Only War.
NPCs will be rebuilt to become compatible and usable in other Warhammer 40,000 Roleplay games
A new Reinforcements system which allows players to temporarily call-in and play as high-level characters will be added.
It is important to note that some of the popular elements from the current beta will be retained in this new direction, some of which are outlined below:

The new sector, Askellon, will remain, giving your Acolytes a whole new sector full of heresy to eradicate.
The character creation system will remain as well, along with Elite Advances, allowing you to play as a Psyker, Untouchable, or even Inquisitor.
Rules for Subtlety, Influence, and Investigation will be retained.
Integrated vehicle and vehicle combat rules will remain.
9/18/2013
Natfka
Fantasy Flight Games, News Headlines