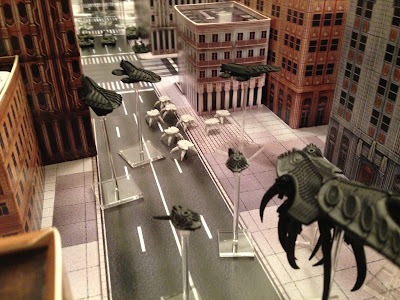 A large battle took place last night, and even though it started in the dead of the night, it raged for several hours until the crack of dawn. 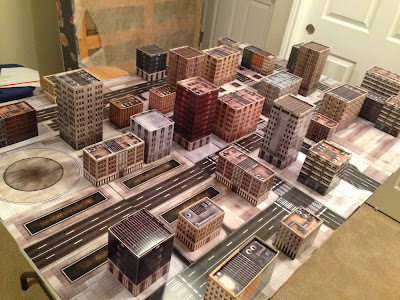 Last nights battle was a 3000 point game of Dropzone Commander. It was the largest game I have played in the system, and it went off quite well. It did take some time as we were slightly distracted a few times, (comparing the old rulebook to the new, and a few other discussions). The game went quite well since I had not gotten in a game of Dropzone since before vacation, back in late July or early August. Even though we should of started smaller, we just had to field everything I have.

I recently received an order of from Hawk Wargames, so it I spent a lot of time getting models ready for this game, and literally I was tired before the first dice dropped, but lets check out what happened. 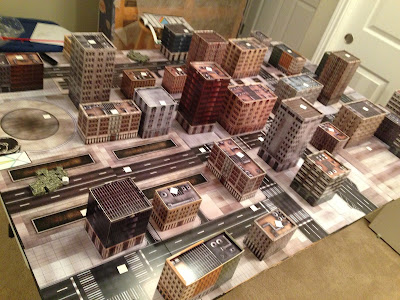 Mission
The mission was rolled, and Search was our game. Search is a number of key objectives known to be located in the area. The only to find them is to get some boots on the ground to discover and if possible, extract the objectives from the combat zone before the enemy claims them. 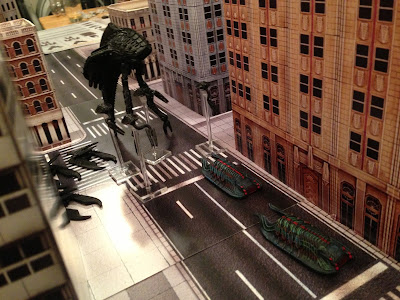 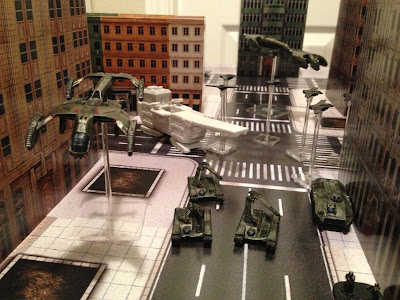 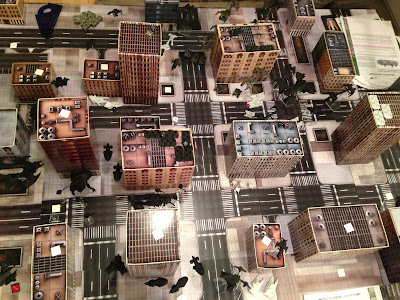 The Game
Round 1
First round both forces come in from their board corners, which places you very far away from each other. However, with the Scourge, I was able to cover a lot of ground quickly, to move immediately into the center of the board and along the flanks. The UCM had to settle for getting as far forward as they could to counter the very fast deployments of the Scourge.

Round 2
Round 2 there was some shooting, as the scourge were attempting to enter key central buildings to set up fire bases, and hold some central ground. While the UCM was deploying hard and bringing their weapons to bear against the buildings and the units that were attempting to dig in. Meanwhile, fast moving UCM special forces were executing roof insertion teams directly into buildings searching for objectives.

Very little damage, as most forces were deploying here, and positioning for what was to come. 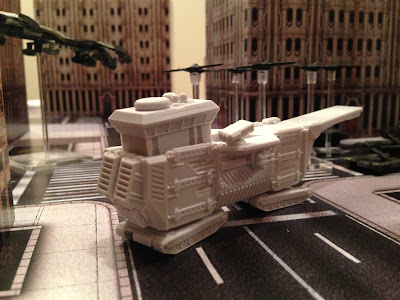 Round 3-4
The UCM was held back from the center of the board by Scourge forward positions and artillery. So all miscellaneous fire was shot at those buildings, and one building had to be evacuated quickly to prevent too many casualties on one flank.

UCM Archangel Interceptors came in too early, even though he could of held them back. An attack run was called in, and through command cards, the UCM were able to prevent any scourge interceptors from coming in. Luckily for the Scourge, AA reaction fire and small arms fire from a building were able to destroy both archangels. Quickly my plan altered to reduce his AA fire so that my own Fast moving aircraft could be called in for attack runs later in the game. 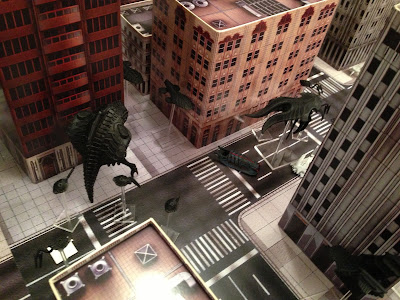 Round 5
Here the last objective was discovered, which created frantic movement and all out conflict to hold and destroy anyone that would get too close to this objective. In the mean time, the Scourge were still trying to get the their 3 objectives off the board, (orbital strikes kept slowing this down), and the Scourges 4th objective was on the run, only to be shot down by swarms of drones. The last scourge objective would have to just be held onto, and not extracted. However some serious AA fire would occur during the last round to remove the drones, and secure holding onto the fourth objective.

Round 6
The final round was a tremendous amount of carnage, as the battle came down to the last round for everything. The last objective that had just been recovered for the UCM was the focus of this last chance desperate attempt for the UCM to move in and try and claim victory.

The highlight of this round of course was the direct hit of an artillery round right in the middle of the UCM's forward push to secure the objective, 5 UCM tanks were destroyed in a single barrage, including ripping apart any AA Reaper Tanks the UCM had in the vicinity. Timed hits by Scourge Air prevented any Dropships from having a chance at extracting the objective, and hunter tanks moved in destroying most of who could even hold onto the objective. 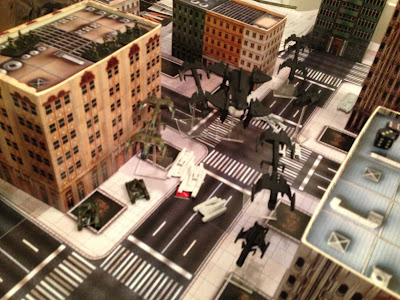 Great game, extremely tactical on the tabletop, and a lot of fun. The Scourge took home a close victory, 7-5. It really was the quickness and speed of the Scourge that drove home the victory.