Epic Armegeddon To Return in 2014 and More on Specialist Games 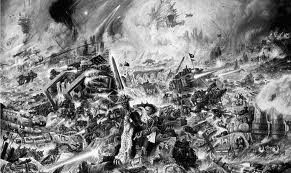 Epic 40k was and is a game that many of us have found memories of playing and loving. Its been years since I have heard of a game of Epic played, and it is one of those game that would be a ton of fun if it returned with support. Today's rumors tackle Epic, giving it a possible release date of July-August of next year.

Now if these specialists games are coming back, my long time favorite would also possibly see a return... Battlefleet Gothic. I would be all over that.

via Tim the Thief
GW will bring back Specialist Games gradually with beginning in the 3th Quarter 2014.
-First Game will be Epic in July or August 2014
-There will be no individual model Boxes or Blister, only Game Sets and possibly "Expansions"
-Sets remain permanent in assortment
-Epic Game Set might feature  Space Marines vs. Orks, there will be Sets for Imperial Guard, Eldar and Chaos
9/18/2013
Natfka
40k, Rumors