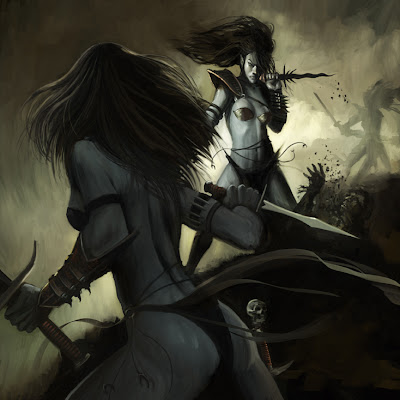 Dark Elves should be leaking a ton of information very soon, and until then we have some sightings that are giving us very detailed information as to what the models look like. Here is the latest on the Cauldron of Blood model.


Please remember that these are rumors until there is an official announcement.

via shabbadoo over on Warseer
A bit more detail on the Cauldron of Blood/Blood Throne:

The whole contraption is a large lower platform on six wheels with a smaller raised platform towards the rear, which is reached by two staircases that curve from the lower center outward to the left and right front of the upper platform. The upper platform is where the Hag stands/Medusa is coiled. Near the top of each staircase is a witch elf guard, and they stand with their feet on different levels of the stairs in a nice "guarding" action pose.

Those that guard the Medusa have spears, which they are pointing down the stairs, as if threatening anything that might come up them. The Medusa's right arm is holding high a spear, point upwards, and her right breast is bare. Also, the Medusa's body is covered in scattered small cuts from which drips blood. The paint job is in the very clean GW style and looks very nice, but I do look forward to somebody doing a bit grittier, more realistic paint job on the Medusa in particular. Seriously, the Medusa is a pretty badarse model, and anybody who doesn't like it should be publicly ostracized.

Behind the Medusa is what looks like a large mirror on a pedestal. The mirror frame is gold, and depicts cavorting Witch Elves. The mirror is painted to look like what appears to be a row of moons in a clear blue daytime sky (i.e. the mirror "looks through to another world" type of thing is what they were going for, I guess). Also, Lion mentioned snakes at the base of the Medusa's tail, but it may be that it is the Medusa's tail that actually splits into multiple serpents itself, as the snakes are painted a similar (though slightly lighter) shade of green to the Medusa's lower snake body. The angle of the pic doesn't show which is the case, so we'll most likely have to wait for the pre-order pics to determine that. For the Cauldron of Blood, at the back of the upper platform behind the Hag is the obligatory large statue of Khaine, sword held aloft.

Lion has described the other models well enough, but I think you can figure out which one of the bunch is my favorite.  Pics ought to drop soon (probably this weekend), but it won't be me doing it. That's about all I am going to share. If I hadn't already started High Elves when the Isle of Blood starter set came out, I would be doing Dark Elves. It is going to be very difficult to resist staring them.
9/17/2013
Natfka
Dark Elves, Rumors, Warhammer Fantasy