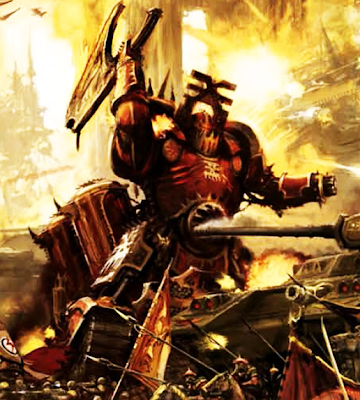 A few days back we started talking about new releases for December, and they included the Books Escalation (super-heavies), and Stronghold Assault (more fortifications). Now we have other sources coming through on other sites that are saying the same thing. This is going to be more than exciting, as 40k is about to move into what I really imagine the 41st millenium "There is only War" is all about.

Please remember that although these are solid, nothing has been officially announced and therefore these remain as rumors.

via Best_Pone over on Warseer
I've been hearing talk of a couple of new expansions for 40K due for release next month:

The second expansion brings superheavy vehicles (and gargantuan creatures) to regular 40k. My understanding is that this will be achieved by adding a new super heavy slot to the force org chart, and that you will be limited to the choices detailed within this expansion (I think there's approximately 15 of them). This expansion will also include new missions.

via Endobai on Warseer
I can confirm both expansions.

Hardbacks, c. 100 pages long.
Escalation provides rules for super heavies, gargantuans and D-weapons + 16 unit sheets providing options for all armies.
For example Revenant titan for Eldar and Dark Eldar ( I guess Tantalus was not good enough?).
I'd expect all models released in plastic + 1-2 per army. Thunderhawks are mentioned as one of those vehicles.

Basically mini-Apocalypse with about 50% superheavies which are described.
The fortification supplement gives datasheets for released fortification sets, how to combine some of them and field as larger constructs + various rules for buildings, ruins etc.

Both books include missions and background sections, but fluff is not too important contrary to codex supplements. Treat them as Planetstrike, Spearhead and similar sets of rules we've seen in the past.
11/03/2013
Natfka
40k, 6th Edition, News Headlines, Rumors, Warhammer 40k