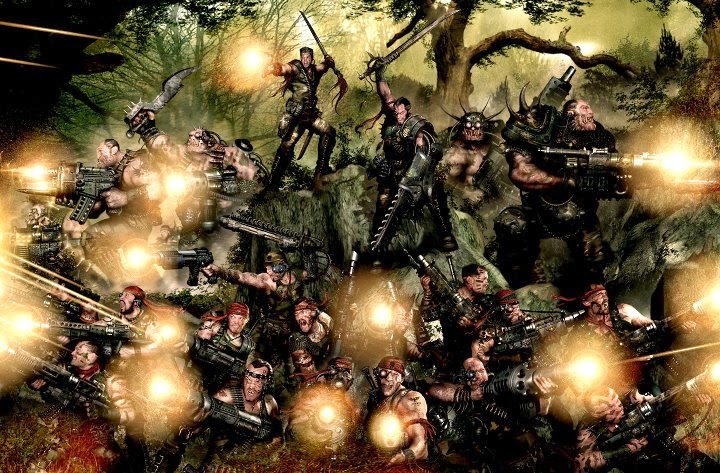 This week has been all about Dwarves, and the pre-orders that just went live today. So before you head to your local gaming shop to get in some gaming this weekend, lets take a look at what's was going on this week.


Astra Militarum Bullgryns
The most exciting bit of rumors this week was directly linked to a new Imperial Guard codex, which we have learned is being renamed, Astra Militarum. This rumor says it all, with new Ogyrns we might be seeing some rules updates (like cheaper Ogyrns) to get the ripper guns back onto the tabletop. I mean really, cybernetically modified riot Ogryns, who wouldnt like that?

Shrink wrapped box ready for sale; I don't know what that implys about
release time.

Three Plastic "Bullgryns" which seem to be armoured Ogryns with large
riot style shields. Looked to be on the same bases as the Space Marine
Centurians. They are painted in a new looking blue/gray urban cammo.
They have armoured looking torsos and loin cloth type things made out
of tank tracks (!). They also seemed to have cybernetic enchancement
(ala Boneheads).

Looking at the back of the box, there was a small picture indicating
they could also be built as traditional Ogryns, which retain there
T-shirts and Ripper guns look. The Orgryn on the back had a Green T
shirt.

40k Radio a few hours later confirmed this rumor with their own addition.
http://natfka.blogspot.com/2014/02/confirmations-on-astra-militarum-ogryn.html ****
So some exciting news. A listener of ours was at a GW store today that mistakenly received a shipment of some unreleased items. It was the plastic Ogryn kit. The rename is confirmed as they were called Militarum Auxillia. Boom! Nailed it.

Dwarven Rules
We had a lot to talk about his week, as we started getting direct information that is rumored to be directly from the rulebook. I am not going to compile it all here for you, but here are all the links you need to discover what is coming for the Dwarves. There is a lot of good information here.

Knights Incoming
The rumors have Imperial Knights coming sometime next month in their own independent (of a codex) book. Mostly likely this will be a supplement or dataslate, and is highly looked for with a lot of excitement. These one man Titans are very likely to be a big splash in our hobby, and I look forward to them. This week, we had more rumors that these were coming, and on exactly what their loadouts might be.
http://natfka.blogspot.com/2014/02/knight-model-kit-description-and-load.html ***

Games Workshop/ Forgeworld
We had a lot of talk about the upcoming merger of Forgeworld and Games Workshop coming right around the corner. Very soon we will be able to buy Forgeworld products directly from GW stores, and this is a big thing for many of us.

First up was talk about the new servers being tested with chosen stores, indicating that already GW is testing their new website.
http://natfka.blogspot.com/2014/02/new-gw-serversbeing-tested.html ****

With Forgeworld coming to stores soon, we are receiving more rumors of their arrival.
http://natfka.blogspot.com/2014/02/forgeworld-soon-to-be-available-at-gw.html ****

Epic Starter Set Not 40k
Rumors had been saying that we are going to be seeing a new update to 40k rules this year, and that a new box set will come to kick that off. Blood Angels and Orks are the rumored armies in that box set. Well, late last weekend, we heard rumors that conterdicted that, saying the following. To top that off, it was two separate rumor sources saying the same thing a few hours apart. Was there some sort of internal GW decision made on epic a few hours before/
http://natfka.blogspot.com/2014/02/blood-angels-vs-orks-will-be-for-epic.html ***
The Blood Angels vs. Orks Starter Set will be the Epic Complete Set, not an new 40k Starter Set.

Warhammer Fantasy 9th Edition
There was a small whisper of a few things being worked out for 9th edition. These included attack ranges, movement, and game sizes. You can read up on these new rumors here.
http://natfka.blogspot.com/2014/02/warhammer-fantasy-9th-new-rules-armor.htmlb ***