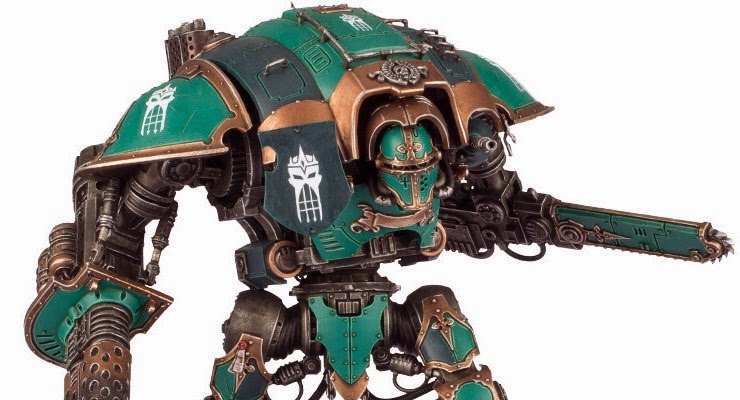 Just wow, here are the details of the Imperial Knight codex and will answer a lot of the questions that everyone is asking. Things like, who can ally, warlord traits, mechanicum entries if any, and more.


All I can say is that this codex will upset some that were wanting more allied connections, even though this does not preclude future and near future dataslates or expansions to allow for Chaos Knights. I prefer it this way, as I would like to see some dedicated new units for Chaos Knights, rather than just slapping them into the allied chart.

Other things not here, Mechanicum or Freeblade entries. It appears to be a one army codex for Imperial Knights with very little in the new unit categories beyond the Knights we already are seeing. This is in fact a mini-dex, and it will be a popular one at that. Imperial Knights are the ultimate crossover unit for escalation scale models and units in our game.

Imperial Knights are in my opinion excellent models, and will be a ton of fun to work into my lists.

Please remember that these are rumors, as the codex has not been released, as is from someone claiming to have an early codex.

via an anonymous source on Faeit 212
I have had a chance to skim through my advanced copy of Codex: Imperial Knight.  Here are the highlights:
1) For non-Imperial Knight armies...you can get up to 3 as a separate detachment.

2) Datasheets.  There is a section in the codex, after organization chart, that covers Datasheets.  None are mentioned but looks like these will be popping up in books...sorry everyone that don't consider them official, etc...

5) Concerning Warlord Traits: They range up and down from being useful to 'meh'.  Examples: +1" to Run/Charge range.  +1 to Building Damage Chart.  My favorite: Warlord gains It Will Not Die!

6) Let me stop all the questions now ladies and gentleman.  Cannot show pictures.  There are no other unit entries for Adeptus Mechanicum or Freeblades.  They are not even listed on the ally chart.

7) The Companion Guide is amazingly beautiful for coffee table style books.  Its a big book, lots of pretty pictures, etc.  It does not contain rules but for collectors its a nice buy.  Average guy might not buy it but dedicated collectors will want to order it.  I recommend ordering it in a Games Workshop, ship to the store for safety and protection of the book.