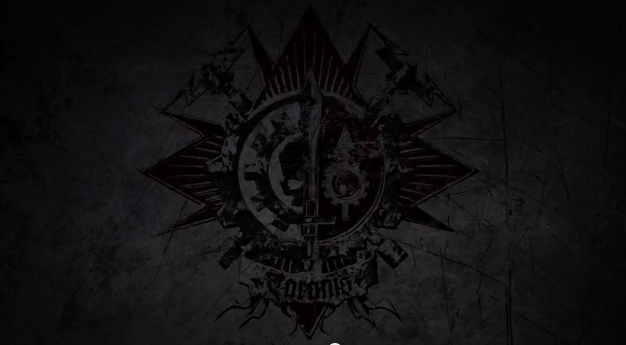 Games Workshop has now released their teaser video, and in it if you look closely is a Knight Errant in the shadows. Also really interesting is the names of one of the Knight Houses, Taranis with their logo.


Of course here is the link to the video teaser, and you can now say its official, these guys are coming Feb. 22nd for a pre-release orders.
http://www.youtube.com/watch?v=Xl9ELMWh_qo

If you are new to the idea of an Imperial Knight, here is some information from 40k wiki on Knight Houses

The basic tactical and sociopolitical unit employed by the Knight Worlds is a House. A Knight House is an aristocratic noble family that owes fealty to the Adeptus Mechanicus, providing soldiers, the resources of their worlds and their own martial skills in exchange for the technological expertise that the Tech-priests of Mars offer. A Knight House is usually headed by a senior member of this family, aided by other elders of the House. Some Knight Worlds have many different families inhabiting them, whilst others are dominated by a single one. On planets with more than one House, the rivalry for the favour of the capital Forge World is high and sometimes breaks into hostility. Despite their personal differences, however, when the Forge World gives the call to arms, all Knights fight side by side against the enemies of the Mechanicus and the Imperium.

In times of war, a House's formation -- Knights and the men-at-arms who provide tactical support -- that goes on Crusade with Imperial forces is known as a Household. Knights are further separated into detachments according to their type for greater tactical flexibility. A Household is under overall command of a Seneschal -- usually, but not necessarily, a Knight Baron. A Household is further divided into detachments, which by principle can only contain Knights of a single type.

Knights are not commonly now seen on the battlefields of the late 41st Millenium. Most often they only enter combat in defence of Mechanicus domains or of their own worlds. They sometimes provide tactical support to a Titan Legion in a Crusade, or to units of the Imperial Guard if their help is ordered by the Lords of their House's allied Forge World. On the other hand, when a force of Imperial Guardsmen acts in support of a Knight Household, the Knight Seneschal technically can take command of the Guardsmen, acting as their company commander for the duration of combat operations.

Heraldry
The Knight Houses use an elaborate system of heraldry signifying their allegiance and the House to which they belong. Knights will use some variation of their House's heraldry as their livery, incorporating its themes and motifs, but no two liveries can be identical. All Knights bear striking, colourful liveries and often adorn their machines with heraldic pennants. It is customary for the Knights to compete not only in combat feats, but also in the appearance of their mounts.


A number of Knight Houses uses a specific style of heraldry. These Houses base their heraldic colours on their Family Banners rather than their shields, using two colours -- the background colour serving as a "base" colour -- to designate an individual's rank in the House. A Squire's Titan would be painted wholly in the base colour, save for the head which would be painted in the secondary colour. Full Knights would have a halved scheme across the body, and Lords would be painted in a quartered colour scheme. The exception to the above would be Wardens, who would always have the majority of their Knight suit painted white, with only one or two plates on the armour painted in a scheme appropriate for their rank.
2/17/2014
Natfka
40k, 6th Edition, News Headlines, Rumors, Warhammer 40k