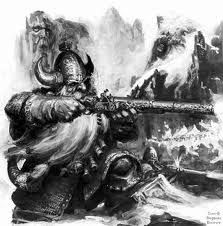 The new Dwarf armybook is being released this Saturday, and inside it is a new rumored unit called Irondrakes. These are heavily armoured warriors in gromril armour, carrying a massive handcannon. So check out the latest weapon of the dwarves below the break.


Please remember that these are rumors from someone that claims to have this weekends White Dwarf. Salt is always required until we an official announcement or release.

via an anonymous source on Faeit 212
Irondrakes are heavily armoured dwarves carrying drakeguns. The guns look like massive two handed cannons that are fired from the hip. Each Irondrake is clad in Forge-proven Gromril Armour.

Above all else, the rules for Irondrakes are in the White Dwarf. I wont give the full layout, as I am sure an image leak is just a few days away, but here is a brief look.