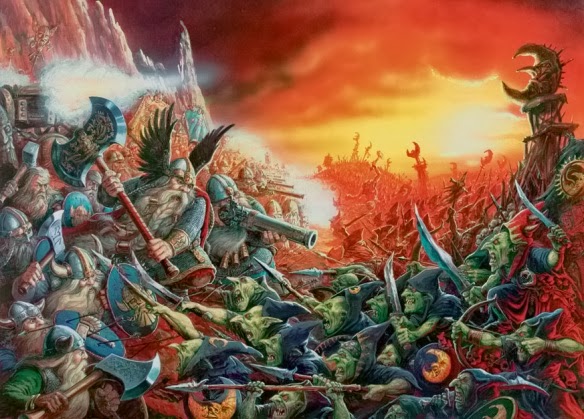 In less than a week we will have the Dwarf armybook in hand, and from all the rumors we have had, there are a few sets out there are the most reliable bits of information as to what will be in there. I've compiled these here.


Please remember that these are still rumors, although I rate them very high. Here is what we know.

Dwarven Rules:
Ancestral Grudge - hatred Skaven/Greenskins; everyone else has a chart.
Dwarf Made - Re rolls
Resolute - +1 Strength on the charge
Relentless - no leadership for marching close to an enemy
Shieldwall - +1 parry when charged
Dwarves no longer have -1 to move when charging/fleeing.

Dwarven Runes
There are about 3 pages of Runes to choose from.  Some of the Runes have different "levels".  One that I remember that caught my eye is a Demon Slaying Rune: When purchased at its maximum "level" it grants the wielder 2+ to hit, 2+ to wound, No Ward Save and either d6 or d3 multiple wounds.  However that Rune is like 100+ points.
Runes are broken down like so: Rune of Blah Cost: X/Y/Z.  x-y-z is the number of runes of that type you can place on an item, increasing its cost.  Description of its exact rules follows a brief "fluff" description. One thing of note: A cannon can have up to 100 pts of Runes!
Conflicting reports, even from me, concerning number of runes.  There are 2x Weapon Rune pages, 4 additional pages with Armor/Banner/Talisman/Engineering Runes. 1x Ancestral Heirloom page (specific named items).

Dwarven Lords and Heroes (known Ungrim/Joseph Bugman/Thorek/Thorgrim)
Added characters: (2) seen in white dwarf weekly, Ungrim Slayer-King, Joseph Bugman, High King Thorgrim
Gotrek and Felix are not in the book, however I suspect we could see a Battlescroll later on.
Thorek is in the book. Bugman is a hero level.

Dwarven Core (Warriors/Quarrelers/Thunderers/Longbeards)
Warriors:
*Stayed the same but with the new rules above.

Longbeards:
*new rules above + old longbeard rules, +1 point, no longer 1 unit for every unit of warriors.


Dwarven Special  (Hammers/Ironbreakers/Slayers/Miners/Cannon/Grudge Thrower/Bolt Thrower/Gyrocopter)
Hammers:
*don't remember points but looked the same; if general is present in unit, any, ANY model can accept a challenge.

Iron Breakers:
*pretty much the same, +1 parry bonus always!, stacks with Shieldwall rule, so 4+ ward save if charged!

Gyrocopter
*got a huge drop in points, almost half, and is now a special, not rare.
*The cost of the Gyrocopter has dropped significantly and moved to special
*it is nearly 1/2 the original point cost.  For approx. 100 pts you can field 1 with vanguard.  You can have 6 in an army and 12 in grand army.  It has a template gun as before that can be swapped out for a Brimstone Cannon: 18", str 5, armor piercing, dwarf crafted, multiple shot d3, quick to fire.

Slayers
*essentially remained the same - I don't recall any Ward Save for them, so still squishy with no armor.
*No plastic slayers.  This doesn't mean they aren't coming (because we don't have finecast versions and still metal) in plastic; just means that at the time of the books production they were not ready or painted.  We have seen this before.


Dwarven Rare (Organ Gun/Flame Cannon/Ranger/ Irondrakes / Gyrobomber).  It is possible I got one of the Rare and Special guns flip flopped.
Gyrobomber
*Gyrobomber is rare
*In movement phase can drop bombs (place large blast, scatter, if it still hits a unit it passed over then resolve wounds, scatter from the center hole again with a small blast as bomb bounces).  In the shooting phase it can shoot its cannon.
*cheaper than the gyrocopter's price from the previous book by 15 points.
*The Clattergun is 24", Str 4, armor piercing, dwarf crafted, multiple shot (4), quick to fire.  both Gyro's can get vanguard.

Rangers
*Rangers were moved to Rare