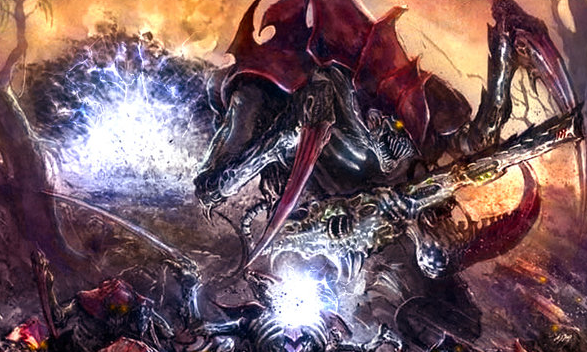 With the last dataslate that giving us 5 new formations for Tyranids, the second, Tyranid Invasion - Rising Leviathan II is giving us another 5 dataslates. Following this line of releases and the fact that we know that there is Rising Leviathan III coming, that will be a total of 15 formations for Tyranids. That is a lot of ability to separate from the Foc and run many interesting options.


Please remember that this comes from Games Workshop Digital and we have not seen the final product yet. By following the links below, you can check out this release and a couple preview screenshots.

We will definitely be taking a look at this release this weekend.

via Eddie on Games Workshop Digital Editions
The second title in the Rising Leviathan series is available to download this weekend.If you want to sweep away your opponent's army beneath an unending tide of alien monsters, this datatslate contains five new Tyraind formations that allow you to do just that.There are also new missions to recreate the desperate battle against the Tyranid horde and new background on the defence of the Imperial World of Satys against Hive Fleet Leviathan.Pre-order the new Dataslate here:Interactive Edition:https://itunes.apple.com/gb/book/dataslate-tyranid-invasion/id826650129?mt=11&uo=4&at=10lqaZeBook Edition:http://www.blacklibrary.com/games-workshop-digital-editions/Dataslate-Tyranid-Invasion.html- Eddie