Details Can Be Found on Imperial Knights 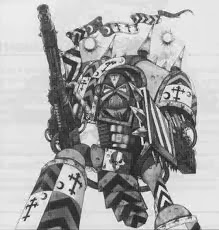 It didnt take long for more rumors to start flowing on some rules for the Imperial Knights. Of course I am going to give these a very low probability, but they are worth pointing out just in case there is some truth behind them.

These come from 4chan. They are definitely rumors, and at this point until something comes along to confirm these, please add a lot of extra salt to these.

(Superheavy walkers, not MCs, which is kind of a relief considering I've had enough MCs for a fucking lifetime. Yes, this means they get Stomp, Hammer of Wrath, and all that bull.)

Paladin: 75 guardsmen cost, Errant is 74. Both are Stormraven AVs with +1 front armor and double the HP, with a 4+ invul on one facing that you choose during opponent's Shooting (but not CC or overwatch). Marine WS, BS, and I, Captain number of attacks with a strength D chainsword. Paladin is armed with a 2-shot battle cannon, and Errant has a +1S 36" large blast melta. Hilariously, the Errant has a single heavy stubber, while the Paladin has 2(!!).

So, the LGS owner did a crazy thing and proxied 5 of them using Riptides against a CSM player. Promptly proceeded to murder all 9 deep-striking oblits, all the cultists, and the suicide terminator squad (Let it be said, the ability to position the deflector shield *after* movement is finished is pretty damn powerful...). Only lost because of the Chaos Spawn and HQ hid on the second level of a ruin, and the 2 Heldrakes having ridiculously good luck on their Vector Strike rolls."
2/13/2014
Natfka
40k, 6th Edition, Rumors, Warhammer 40k