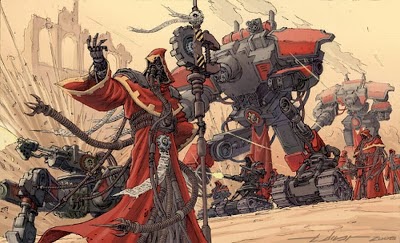 It looks like February 22nd will be the date for pre-orders, the same day that issue number 4 of the White Dwarf will be out. This week's current White Dwarf has the hint.... Very Big Guns, New Rules for the New Kits.....


Hints of Knights in White Dwarf Issue #3
Here is a link to the picture in question from issue 3 of White Dwarf that is due to be out this Saturday.
http://tinypic.com/view.php?pic=zxtm6w&s=8#.Uv0RgvldWSo

If you missed our other rumors regarding Knights, here is what has been said in the last 12 hours.

via Imber from the Faeit 212 inbox
Kits are in US and have been for some time, at least a week. Insider surprised it took this long to leak. From sounds of it, wide access to loyalist armies.

Also a store is already accepting pre-orders for Imperial Knights. Store name withheld for obvious reasons.
via a store in Arizona's Facebook page

Pre-Order the Imperial Knight Titan, and the WD with it's rules at the shop now!!!


So obviously we are looking at issue #4 for pre-orders for Imperial Knights. What other form this will take, dataslate or supplement is still unknown. It is suggested by rumors though that the rules or at least some of them, will be in the White Dwarf released on February 22nd.
2/13/2014
Natfka
40k, 6th Edition, News Headlines, Rumors, Warhammer 40k