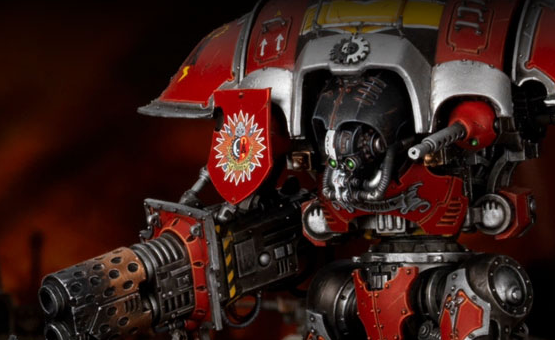 Want to get a good idea what is in the next White Dwarf about the Imperial Knights? Here is an advanced rundown.


Please remember that this is still considered rumor, as the issue is not fully released yet, but apparently seems to be available.

via a Reader here on Faeit 212
I was able to pick up the upcoming White Dwarf Weekly no. 5, and thought you'd like to hear some of this in advance.

The Freeblades mentioned as mercenaries do not appear to be something that anyone can ally with. According to WD, the Freeblades have cast aside their houses and heraldry, but continue their loyalty to the Imperium of Man, "even until death."

This last bit was in a section explaining the 'Marks of Fealty."  These are the badges you can see above the knight's head.  So far, I've noted three; an Aquila, he AdMech icon, and this last, the Laurels Fidelis.  This last one is a skull enwreathed with a laurel.

As these are the three armies that have been purported to make up the Imperial Knight codex, I'm not really seeing anything, fluffwise, that lets Chaos or any Xenos armies take these as allies. Well, I suppose if they can be allied to Guard who then are used as Renegade Guard... I don't know.

There's a bunch of really neat articles in this issue.  The Companion book appears to be just that, a companion for the Knight Codex.  The article states that it contains heraldry and history, expanded fluff, for the IK release.  Kind of a bummer, really.  It lists the 7 major Houses of the Knight Worlds, and 7 famous Freeblades are described.

The Codex is mentioned also.  Of note are "knightly ranks" in a primary detachment.  My assumption would be these ranks are for the various Knight Barons, Knight Seneschals, Knight Wardens, etc...

This assumption is backed up by the battle described between two of the WD staff, Chaos and DA with IK allies. There were 5 knights with different "ranks" with the DA force. Interestingly, but maybe not an indicator, there were no knights on Chaos' side...just two Lords of Skulls.
2/26/2014
Natfka
40k, 6th Edition, Imperial Knights, News Headlines, Rumors, White Dwarf