Someone with the Dwarf's Armybook Reveals 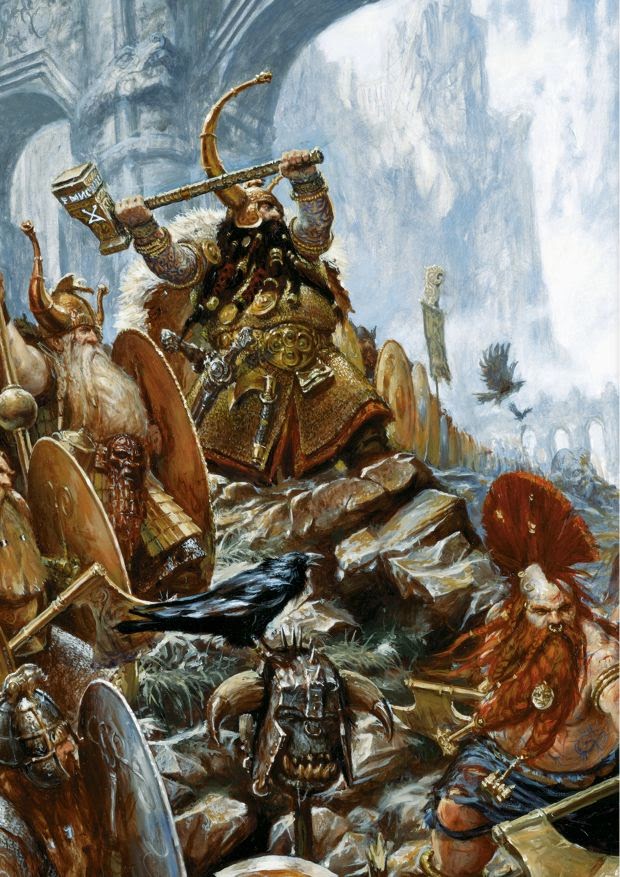 It looks like the gates are open, and the information is flowing now. Someone has the book and is taking questions and laying it all out for us to see for the upcoming Dwarf's armybook.


Please remember that even these are considered to be rumors until we get the official release.

via Saldiven  (Bugman)
The Gyrocopter is a Special choice, and you can take up to 6. They are not squadrons; there's just a little note that says you can take six of them.

The Gyrobomber is a Rare choice.

Rangers are, in fact, a Rare choice, as well.

Gromril armor is just a 4+ save; I don't recall there being a ward save included as well.

Dwarf Crafted is a rule for missile weapons. It allows the weapon to be fired as a Stand and Shoot reaction without the -1 penalty.

The thing that surprised me the most about the book is the large number of ways that you can get the Multiple Wounds (d3). It's freaking everywhere.

Another thing is the Rune that's a better version of Red Fury. If you take three Runes of Fury, the model gets +1 Attack, Frenzy, and for every successful To-Hit roll, the model makes another attack roll; these bonus attacks do not generate additional attacks. If you put that on a Lord, it would have 6 attacks that could theoretically generate another 6. In case you didn't notice, the extra attacks are generated by successful To-Hit rolls, not wounds.

Oh, yeah, the Flame Cannon now has two firing modes. The first is just like a regular Flame Cannon from the main rule book. Alternatively, it can be overcharged so that you can nominate a point up to 12" from the Flame Cannon to be the point from which the artillery die roll originates for determining where the template ends up. But, if you fire in this mode and roll a misfire, you subtract 1 from the roll on the black powder weapon misfire table.

Hrm. Lemme see what I can remember. Most things have Heavy Armor now, even the artillery crew, if I remember correctly. The new units are the Bomber and the Iron Drakes. I don't recall any others.

Slayers didn't really change much, I don't think. I never played them before. They still have the Slayer Axe rule. They can never wound anything on worse than a 4+. There's a special character Slayer that has a 3+/4++, and if you take him, he can be the Army General.

The Organ Gun is now BS based, but rolls two artillery dice, rather than one. It can be given up to 50 points of Runes, and there's a +1 to hit Rune. Also, the range is now 30"; I seem to remember that it was 24" before. Is my memory correct in that.

The 'Copter has a once per game Diver Bomber attack that is kind of similar to the Drop Rocks attack of that flying unit in the Lizardmen book have. The basic weapon for the 'Copter is a S3 Flame Template, but can be traded for free to a 18" S5 Multiple Shot (4) gun. I'm pretty sure it's 4 shots. Up to half of the 'Copters in the army (rounded up) can be given a 20 point upgrade that allows them a Vanguard move. I'm really liking the idea of Vanguarding up a couple of them to move into position to five the template down the length of units from outside their charge arc.

The Master Rune of Balance only steals a die on a roll of 4+. All the rune-guys can channel.

I wasn't really impressed with the Anvil. The first power makes all friendly units within 12" (or it might be 24", can't remember) Immune to Psychology for a turn. The next one buffs a target unit's Armor Save by one (I think, really not sure on this one, can't remember for sure). And the last one is a S4 magic missile that inflicts 2d6 hits, I believe. They all work like bound spells.

Oh, the bomb thing that the 'Drakes can get is an 8" range weapon that functions kind of like a Stone Thrower. I can't remember the Strength of it. It seems kind of risky, though, since to be close enough to use it, you're close enough for it to land back on top of you.

I believe that Ironbreakers and Hammerers are both 14 points, base. 'Breakers can get a shield for 1 point. Sheildwall is a rule that on the turn the unit is charged, they get +1 to their Parry save. There's another rule that's like "Gromril Shield Wall" or something, and I think I remember that this gives the +1 to Parry save at all times.

One thing for sure, Dwarves will no longer be shutting down the magic phase. Rune-guys can channel for Dispel Dice, but don't automatically provide them. The army gets a base +2 to attempt to dispel, regardless of what's in the army. The Master Rune of Valaya adds another +2 to dispel, and will dispel any RiP spell on a roll (can't remember the target number, I think it's a 3+) at the beginning of the Magic Phase. There's no range, so any RiP spell on the table has to be rolled for.

I'll look for more specifics on the Rune-guys tomorrow.

I'm pretty sure you can still take multiple Runes of Spellbreaking. The Spelleating one still exists, too.

Like I said, I might be mistaken about the dispel dice thing; I didn't read the book cover-to-cover, or anything. I'm very confident about the +2 to dispel; but there might also be somewhere else that mentions additional "free" dispel dice.

Oh, I actually kind of like the Oathstone now. I never used it in the last book, but I seem to remember that if you planted the Oathstone, the unit couldn't move anymore. Or was that the previous army book? Anyway, the Oathstone doesn't now prevent the unit from moving. The unit can use Parry saves in any direction and cannot have their ranks Disrupted.

The base 'Copter cost is 80. The Vanguard move upgrade is 20 points.

No big centerpiece model. In fact, the only unit types in the book are Infantry, Warmachine, and "Unique."

The Flame Cannon also has Multiple Wounds (d3).
@blind bum: It's the actual army book. By "demo book," meant that it was a single copy given to the store. They used to do this a lot before. The store owner was actually willing to sell it to me today, but I didn't want to take it away from all the other people that might want to look at it just to have it a week earlier than normal.

Miners use regular Ambush rules now. They can be upgraded to have a single use missile weapon, but I kind of thought it was too expensive for what it does. The Drill still exists and gives a +1 to the roll to see if they show up.

I actually kind of like Ironbreakers. With Shields, they are T4 with a 3+/5++. They're 14 points, just like Hammerers. Hammerers are more offensive minded, but still only have a 5+ save from the Heavy Armor.

Slayers did have one cool rule, but dunno how worthwhile it'll be in play. If a close combat attack (excluding Impact Hits) reduces a Slayer to 0 wounds, that Slayer model makes a free attack right then before pulling the model. Other than the special timing of the Attack, it's treated like a regular attack roll. This includes being killed by Stomp, for example. So, if you're facing something like Ogres, when the Ogres swing, the models they kill automatically attack back. Then the remaining eligible Slayers make their regular attacks. Then, any models killed by the Ogres' Stomp attack make their free attacks.

I kind of remember that just a lot of units have Shieldwall. I know I remember that regular old Warriors have the rule. Ironbreakers have the upgraded rule (something like Gromril Shieldwall, or something) that allows them to (I believe) have the bonus +1 to Parry all the time. I'll check to make sure tomorrow.

Dwarves do NOT have access to the Main Rulebook magic items, but they have an extensive listing of

Runic items. There's one page of unique Runic items. Two pages of weapon runes. One page each for Armor, Standard, Talisman, and Warmachine Runes. So, all told, a total seven pages of what amount to Magic Items, with a huge amount of customization possible. Several runes can be taken multiple times, with each additional rune bringing an added benefit. My favorite example is the one I posted earlier with the Rune of Fury: 1 gives you +1 Attack; 2 gives you +1 Attack and Frenzy; 3 gives you +1 Attack, Frenzy, and each successful To-Hit roll results in a bonus attack (bonus attacks do not generate additional attacks). On a Lord, that means he's got a chance of 12 attacks.

Master Engineers allow re-rolls to a dice involved in firing warmachines. If the Engineer is within 3" of a Warmachine, he can take a Look Out Sir! roll from shooting attacks, and successful rolls divert the shot to the Warmachine. There's more, but that's all I can remember right now.

Oh, Bugman allows you to convert one unit of Rangers into what might as well be Longbeard Rangers, but if you do, then Bugman must start in that unit and cannot leave it. It costs an extra 3 points per model, and the Rangers get +1 to WS/S/and I think Initiative, but not positive about the last stat. He still has the healing draught cup. He also has a special rule where each turn you roll two dice and look at a chart to see what affect his Ale has on the affected units (can't remember which units are affected). A roll of 2 kinda sucks. There are two other effects, but I can't remember them off the top of my head. I think one is Immune to Psychology until the next Dwarf turn. I think the other is +1 Toughness til the next Dwarf turn; it's something like that because the fluff for it talks about how the Dwarves are kinda hammered and can't feel pain anymore.

I'm almost certain it's one free attack per slain Slayer. However, it gets to use whatever special rules apply to that attack. So, if you were swinging with the Great Weapon Slayer Axe, it's getting the bonus Strength. If it's a character with a Runic Weapon, the attack has the benefits of the Runic Weapon. Oh, here's an interesting one. I'm pretty sure it was one of the Special Characters, but there's a way to get +3 to the roll at the beginning of the game to see what kind of Hatred you get. So, with that guy, the whole army has Hatred of the other guy's army on a 2+ roll. I wanna say it's the super expensive Dwarf King guy (he's like 650 points), but not positive.
2/10/2014
Natfka
Dwarves, News Headlines, Rumors, Warhammer Fantasy