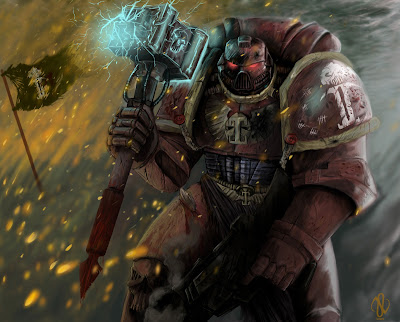 There are six relics that are being mentioned for the new Space Marines, and a few of them look pretty good. I am personally liking the Burning Blade and Teeth of Terra, but the chance to just give a character Eternal Warrior with a Relic Storm Shield..... cool.


Please remember that until the codex is released these are considered rumors.

Armour Indomnitus: Grants a 2+ / 6++ save and Relentless. Once per game for one phase it can overcharge the powerfield and confer a 2++ save.

Primarch’s Wrath: Shooting Weapon with Str. 4, AP 4. Salvo 3/5, Shred and Master-Crafted. Range of teh gun was not mentioned.

Standard of the Emperor’s Ascendance:
-Units in 12” with the same Chapter Tactics re-roll failed morale checks and pinning tests.
-Friendly units chosen from the Space Marines Codex within 6” of the bearer have the Hatred, and +1 to  Assault results.
-The bearer and his squad have the Fear special rule.
8/29/2013
Natfka
40k, 6th Edition, Rumors, Space Marines, Warhammer 40k