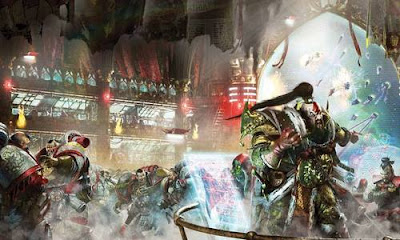 Space Marine discussion is literally everywhere right now, and since I woke up this morning thinking about them, it was time for an early look at what I think about for the new codex.

It is very certain that the latest we have heard from Space Marines is very much as it is in the codex. If you missed this post just follow the linkage.
http://natfka.blogspot.com/2013/08/space-marines-what-is-in-codex-and-what.html

These thoughts are based off of rumors that the linked article above is accurate on what we will see in a week and a half.

First off, Warlord Traits. As in the Eldar Warlord trains, there are a decent number of one use only abilities. I know we only play 5-7 rounds of play in 40k, but as a general rule, I dislike one round Warlord traits. When I see these, I check to see if something stands out really strong on how I play, and then move on looking for something might have a longer and more flexible effect on my game. One shooting round of re-rolls for a unit?

Capter Tactics I think is where this codex really shines. Being able to ally with other chapters, and split out your chapter tactics is just awesome. So yes, the Devastators are all from Imperial Fists with tank hunter and +1 rolls to damaging buildings. And yes, they will be allied with Ravenguard who all have scout and for the first turn have stealth. A great way to get those rhinos Land Raiders etc into forward position for assaulting, not to mention great jump units able to use their jump packs in both movement and assault phases.

Of special note, and just screaming how strong they will be....Khan Rocks..... So yes, the White Scars players will almost always include Khan. Why? Scout to every White Scar biker?.... yes please. White Scars with Khan will have scout, hit and run, +1 jink, and squads of 5 or more become troops. White Scars are just incredibly fast, can move into forward positions quickly with ease

The effects of Marines allying with Marines is going to be a lot of off color paint schemes or greys showing up at every table. Players will want to be able to use whatever chapter tactics they want, and not miss out when they want to switch for this game or that tournament. So I expect a lot of homebrew 2nd founding chapters hitting the scene.

By Far the chapters I see being used the most based off of chapter tactics, are White Scars, Imperial Fists, and Ravenguard.

Once we see the first codex supplement for Space Marines (White Scars in October), marine bikes will probably take the forefront.

For myself...... with Imperial Guard not too far away, expect to see Khan in my line up as allied forces. Nothing says forward moving fast forces like Khan. Heck, he may even make my Eldar ally. Mechdar with Khan. "Shivers..........."