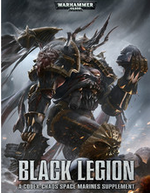 All around the globe, clamors of 4 Heldrakes (under 2000pts!), nice but expensive artifacts, and chosen as default troops choices is ringing the sounds of bells. So far I have been hearing mixed words about it, but there is always the internet rage. So lets take a look at what is in the new supplement.


via Cheexsta on Warseer
Supplement is out in Australia.

There's a new Daemon Sword, slightly cheaper than the Axe of a Blind Fury. Gives a bonus to initiative. Should've always been in the codex, IMHO.

There's an awesome artefact that allows the bearer to fire an unlimited range large blast that scores D3 automatic penetrating hits to any vehicle it touches, usable once per game. Very expensive, though.

A psyker-only artefact increases the bearer's mastery by 1, though it doesn't allow him to generate another power (boo). Instead, it gives him a Nova power that increases range with more Warp Charge points.

Oh hey, an artefact that gives Eternal Warrior and Adamanitium Will. Nice. Not cheap, though.

Warlord Traits:
1. Black Crusader
2. Rerolls to Chaos Boon table for the Warlord.
3. A one-use Flamer. Woo.
4. Warlord has IWND.
5. Attacks have a chance of causing Instant Death.
6. Friendly units near the Warlord have Stubborn.

Haven't looked at the fluff or CoD or Planetstrike sections yet.

no idea from where
Just had a quick flip through the new artefacts are neat as are warlord traits. Can ally with c:csm and chosen are troops by default. Votlw mandatory and if taking abaddon, one unit of termies can get +1 ws and bs for a price. No new units or characters.