The Next Primarch Revealed 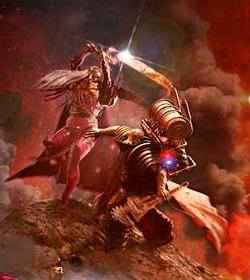 After this mornings post, one of our most solid rumor sources chimed in with the answer to what most people were asking.... So here it is, The next Primarch by Forgeworld and to be up for sale at Games Day UK, is......

via an anonymous source on Faeit 212
It's Ferrus, he connects with Fulgrim into a duel/diorama.

Who is Ferrus.....
via 40k wiki
Ferrus Manus, also known as The Gorgon, was the Primarch of the Iron Hands Space Marine Legion, a master smith known for creating weapons that were able to inspire awe in any who saw them, such as the sword he created for Fulgrim, Primarch of the Emperor's Children Legion or the Bolter he crafted for Vulkan, the Primarch of the Salamanders Legion, said to have a barrel designed to look like the gaping mouth of a dragon.

Ferrus' hands were covered in the metallic substance known as necrodermis and he needed no hammer or flame to create beauty through metallurgy, using only his exceptionally powerful hands to mold and shape molten metal. Ferrus forged his closest bond with his brother Fulgrim, but this relationship ultimately ended in tragedy after Fulgrim fell to Chaos during the Horus Heresy.

During the Drop Site Massacre on the world of Istvaan V at the start of the Heresy, Fulgrim decapitated Ferrus with a daemonic sword, an action that ultimately cemented his slavery to a Greater Daemon of the Chaos God Slaanesh.
8/28/2013
Natfka
40k, 6th Edition, Forgeworld, Rumors, Warhammer 40k