Here is What You Need To Know About Space Marines 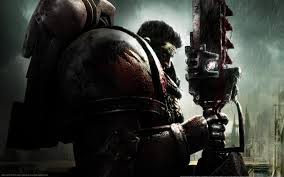 There is a ton of information here on Space Marines, and while this is still considered rumors, it is very solid information on what we will be seeing in the codex.

A huge thanks to Zion for throwing all of this information into one format from 40k Radio. 40k Radio has a print copy of this codex, and on their show went through it in detail.

Please remember that until the codex is in hand, these are still considered rumors. If you missed the first batch of these, here is the link
http://natfka.blogspot.com/2013/08/space-marines-what-is-in-codex-and-what.html
Thanks again Zion (and for sending me the link)
via Zion at talkwargaming from 40k Radio
Relics
Burning Blade: S+3, AP2, Melee, Blind, Incandescent
Incandescent: At the end of an Assault Phase in which the bearer made a successful to-hit roll with the Burning Blade roll a D6. On a roll of a 2+ nothing happens. On a roll of a 1 the bearer takes a S4, AP2 hit.

Armor of Indomitus: 2+, 6++, Relentless Same cost as a Landspeeder with a Multi-melta
Once per game during any phase the wearer may choose to temporarily push the forcefield to its limits. For the duration of that phase the Armor Indomitus has a 2++ Invunerable Save.

Standard of the Emperor Ascendant: Same cost as Landspeeder Stom with Multi-melta
Friendly units n 12" with the same Chapter Tactics as the bearer re-roll morale checks and pinning tests. Additionally, friendly units chosen from Codex: Space Marines within 6" of the bearer have the Hatred special rule, and add +1 to their total when determining their assault rolls. Furthermore, the bearer and his unit have the Fear special rule.

Wargear
Ranged Weapons: Models may replace their Boltgun or Bolt Pistol with one of the following:
Stormbolter
Combi-Flamer, Melta, Plasma, or Grav
Grav Pistol
Plasma Pistol

Command Squad
1 may be taken for each Captain, Chaplain or Librarian in the army
Apothecary
Storm shields
May trade Bolt Pistols for Bolters
Veterans may take Melee, and Ranged, Special wargear
May take Standard of the Emperor Ascendant

Techmarine
May take one per HQ in your army. Does not use a slot
Wargear Lists: Ranged, Melee, Special Issue
May replace Bolt Pistol or Bolter with Power Axe

Crusader Squad
Neophyte base leadership now 8 (Zion's notes: I did check, and the old ones were base 7, they just tested on an 8 because of the Initiates, so please no burning my car down for being "wrong")
1 Initiate may take either a Heavy Weapon or a Power Weapon or a Power Fists
A different Initiate may take a Special Weapon
Sword Brethren upgrade same cost as Veteran Sergeant (same wargear options too)
Has Chapter Tactics: Black Templars
May take a Land Raider Crusader as a Dedicated Transport

Legion of the Damned
1 model may take one of the following special weapons: Flamer, Melta , Plasma
No grav option
1 model may take a Heavy Weapon from the wargear section
Sergeant may take a weapon from Ranged wargear
Sergeant may replace bolter with chainsword for free, power weapon (same cost as wargear), power fist (same cost as wargear)
All shooting attacks ignore cover
All special rules the same

Assault Centurions
Up to 3 models may be purchased for purchased for the squad
May replace the Iron Clad Launcher with Missile Launcher for free
May replace Twin-linked flamer for a Twin-linked Melta for the cost of a flamer in the wargear section
Sergeant may purchase an Omniscope for the cost of a melta gun. It grants him Night Fight and Split Fire
May take a Land Raider as a Dedicated Transport
Has Move Through Cover, and Extra Bulky Special rules
Decimator Protocols: Models with this rule may fire up to 2 weapons in the shooting phase.

Storm Talon
Same as in Death from the Skies

Scout Bikes
Grenade launcher upgrade
Locator Beacon
Veteran Sergeant upgrade same cost as in DA book
Sergeant/Veteran Sergeant have access to Melee and Ranged wargear
Cluster mines are now placed by putting a marker in a terrain peice for both players to see. They alsonow turn a piece of difficult terrain into Dangerous terrain. Limit 1 marker per terrain piece.

Hunter
Skyspear Missile Launcher: 60" S7, AP2, Heavy 1, Savant Lock, Armorbane
Savant Lock: When shooting at a flyer or flying monstrous creature, you put a marker on it for each miss. The markers stay on the flyer until it leaves the table, is destroyed or is engaged in close combat. At the beginning of every friendly shooting phase you roll for those markers. On a 5 or a 6 that missile hits vehicles in the rear armor, these shots are resolved using the above profile.

Stalker
Icarus Storm Cannon Array: 48", S7, AP4, Heavy 4
Icarus has two firing modes: Single target and Dual Target
Single target: above profile, twin-linked
Dual target: Must be declared before shooting. Pick two targets in range and resolve shooting attacks against them using both of them, but at BS2

Storm Raven
No changes from Death from the Skies
Other Notes:

Graviton Weapons
All S-, AP2
All have the Graviton rule: Use armor save to wound. Against vehicles roll a D6, on a 1-5 nothing happens, on a 6 the vehicle is Immobilized and loses a hull point. Grav weapons do not effect buildings.