Ork Psykers On Steriods, That Is Until They Explode 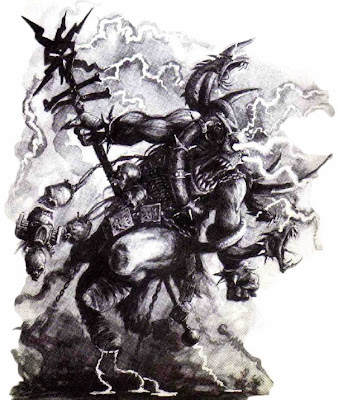 Yesterday morning we had a rumor that seemed a little out there when first looking at it, but the more readers commented on what was said, the more seemed like there was something to this. Of course, it also helps when we get information from a solid source that mirrors the previous rumor, and then goes into more detail.


Please remember that these are rumors. To see the previous rumor regarding Wyrdboyz
http://natfka.blogspot.com/2013/08/ork-psykers-not-using-levels.html#more

One last thing before the rumor is that I was told the codex is not yet finished, so this is a work in progress.

Dakka squads if they kill models in the shooting phase generate a wyrd token, placed beside the unit.

Choppin squads generate a wyrd token every round they're in combat.

Squads above a certain size generate a wyrd token at the start of the ork turn (including the first),

And you get 1 per 3 as your rumor suggested at the start of your turn as well.

When you go to cast a power you simply collect tokens from squads (and there is a strategy to use tokens from units about to regen them as they can't have more than 1.

Wyrd tokens are lost if the unit is fleeing, off the table (even ongoing reserves) or destroyed.

there is a maximum amount of wyrd you can use in a turn.

Ork powers have minimum and maximum wyrd they can spend (think the black legion supplement) and that wyrd boyz can explode again, and it becomes more and more likely the more tokens they use on a power
8/31/2013
Natfka
40k, 6th Edition, Orks, Rumors, Warhammer 40k