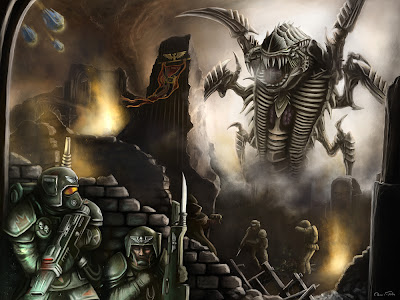 There is a large group of Tyranid rules that are now floating around on 4Chan and all the forums by now. Its hard to tell how good of a rumor this is, so take it with a little extra salt until we can get more information. In my opinion, if this is real in any way, its from playtest material.


Please remember that these are rumors, please add some extra salt on this one.

Via 4chan:
Army-wide notes
- No FOC and ally table changes
- Devastation and Adaptation are new power tables with 3 powers each + primaris.
- Primaris for Devastation = Warp Blast, Adaptation = Onslaught (similar to battle-focus)
- All Tyranid powers can be used with either one or two charges to increase the effect.
- Ravenous Advance: Units with this rule can run & assault in the same turn.
- The Ground Trembles: All MC cause d3 Hammer of Wrath hits.
- Red Terror, Deathleaper and Old One Eye are unique upgrades to their respective broods.

-Harpy/Erinye, plastic dual kit.
- Harpy is designed to kill infantry hordes/provide support via its special vector strike.
- Vector striking it can either use Spore Mine Cyst to create blasts along the path or Sonic Screech to halve initiative and cause a pinning test.

- Erinye is an AA variant in Elite, very different front torso/head piece with gribbly tentacles.
- Increased Swoop speed and its gimmick is grappling other flyers.
- Vector strike -> dice roll 4+ -> the enemy flyer is dragged directly behind where the Erinye ended its move, including a new facing.
- Both can buy broods of Gargoyles that can drop off in the movement phase when not vector striking.

- Both types can upgrade up to ML2 but only ever get 1 power, each Elite choice is a unit of 1-3 that can contain mixded Zoan and Gene.

- Doom has access to all the above tables and comes with Essence Leech and 3 powers.
- Consumes a wound every time it uses a power (except for Leech), but can keep casting until a Perils roll or its down to 1 wound.

Mycetic Spore/Mycetic Hive Node, plastic dual kit
- Spore is a Dedicated Transport, notable changes are that SC can join and MC broods can all opt to get spores.

- Hive Nodes are bought by HQ models (1-3 choice for Tyrants, 1 for every other HQ), no transport capacity.
- Nodes provide Synapse and can be configured in one of many ways. Grants poison or shrouding to nearby units or terraforms (Dangerous Terrain) the surroundings.

Carnifex
- Old unused bimorphs in the box are options again.
- Base cost the same but upgrades are much, much cheaper overall but lots of "only buy 1 out of this list" kind of choices which greatly limits what a fex can have.
- Tusked gives HoW an AP value, Thornback increases the number of HoW hits.
- Enhanced Senses gives Night Fighting.
- Tail Scythe & Tail Mace each deliver a single hit to all models in BtB at Ini 1, with different stats.
- Living Battering Ram rule: Changed to allow the Carnifex to assault the contents of a building/transport on a 4+ if it was destroyed by its charge, rolled once for the brood.
8/20/2013
Natfka
40k, 6th Edition, Rumors, Tyranids, Warhammer 40k