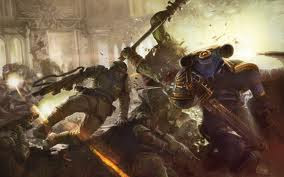 This has been a maelstrom of Space Marines. Almost to the point of drowning out all other information. However, there are a few things beyond marines, but first..... Lets talk Space Marines.


Space Marines
Space Marines are going to be huge. There is no denying that. They will be the new norm on the gaming table, and to be honest, I miss them. Its been a long time since BS, WS, S, T of 4 with a 3+ have ruled the tabletops. So I am glad to see them come back with a vengeance.

Even though currently we only have the White Dwarf to go on, there are still a ton of questions out there that are on my mind when it comes to this new release.

Allies chart:
Black Templar getting rolled into the Space Marine codex might be old news by today, but how it is going to effect the allies chart I hope is dealt with in the codex. I am going to assume that they will now just be Space Marines on the chart, but there are some odd directions that it could be ruled and used on the chart.

Grav Weapons:
Just wow. AP2 weapons that wound based on your armour save. While we dont know the strengths of the weapons, and I am sure there are a couple different varieties, these will be the new terminator bane. Marines will be excellent at ripping apart Marines.

However..... the more of these we see, the better off my Toughness 3 models will be with a 5+ armour save. So Eldar, Tau, and even Tyranids that seem to be next might be getting a boon when it comes to these new weapons.

Tyranids
I have had another confirmation of Tyranids in November, but that will difficult to get more information during the weekend. This is one codex that I am excited about, and looking forward to even more than Marines. Simply because I have felt that they took it in the backside when it comes to the allies chart, and some of their units.

Tyranids are just so iconic, that I cannot wait to see them on the field. I am hoping that we will be seeing Imperial Guard afterwards, so that we can have some very classic 40k battles raging on the tables soon.

I am hoping for one large release month for print copies of supplements that have only been digitally released. I am starting to feel left out and behind when it comes to releases. very sad indeed.

Vacation
I am headed back to the Portland area on Friday. Road Trip back home. Very excited to get back, and to get back into routine, however, a trip back into the woods for some fishing is likely before things settle.

Once things get back to normal, I will be getting back on track for some battle reports and videos again. Between vacation and space marines, I have gotten in a single game of 40k.