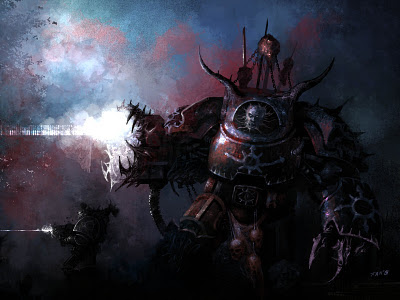 With the way recent rumors have been flowing, a future of how and what models are going to be coming is becoming clear. Things like Cult Terminators.... (a new way of fielding existing units) seems to be on the horizon. This opens up a ton of options and variable units that we could be seeing in upcoming supplement releases.


Yesterday's rumors were very enlightening. Variants of existing units will likely start appearing in codex supplements in the near future. We have been told in the past, that Games Workshop started off first with the easiest of choices for codex supplements, meaning they started with ones that were the easiest to introduce with very small changes or variation to the parent codex. In the future supplements would be pushing that envelope and moving to eventually releasing models alongside a release.

The idea here is that people shouldn't feel like they have to get a supplement.  Anything that's in a supplement, they have access to (model wise).  No one is left out.

This for me is just exciting, as it opens up a huge box of possibilities for future releases. I think its a very smart move on the side of Games Workshop, as things as simple as tank variations can easily be added to the game with little effort.

As always a game with options and variability are huge for me. Nothing worse than showing up at a tournament and seeing just slight variations of the same thing on every table. "So how did your Grey Knights do....... ah, about the same as mine".

Getting to see these options and how they can play out in the future also just opens up the game, and allows so much to the creative modeler out there, that for years to come it will be exciting just to see what is being fielded when you show up at a tourney.