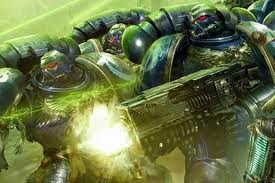 Just because of the heavy load of articles right now, I have been sitting on this for a couple days now. A few days back before the dam broke on the new Space Marine codex, I was given this, after we were discussing the possibility of a new dedicated transport for Vanguard Veterans.

Also a bit on the new tanks having vindicator style armor.

Here is a link to the previous rumor on this subject.
http://natfka.blogspot.ca/2013/08/space-marine-vanguard-new-dedicated.html

I suppose the cool part of this, is that there is more coming in the future. Does this mean that the new AA tanks (stalker and hunter) have 13 front Armour? Sure looks like it.

via an anonymous source on Faeit 212
I can confirm that it didn't make it into the book.

The only new vehicle is the AA predator, and it uses the vindicator style armor.


Rumors from Tuesday
A note about this bit.........The discussion was mostly about the new codex, but also about things down the pipeline. (which often appears a year out if based on previous discussions). So where this falls I am not completely sure. This being released on the site was OK'd, but I was not given a time frame for this.via an Anonymous Source on Faeit 212a AV 12/11/10, 11 transport capacity, skimmer tank, fast attack option with medium weaponry that can be taken as a dedicated transport by vanguard veterans
8/09/2013
Natfka
40k, 6th Edition, Rumors, Space Marines, Warhammer 40k