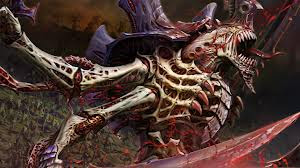 This morning we have an older Tyranid playtest set, that is about 6-7 months old according to the source. So while looking at playtest rumors, its important to note that playtest rules tend to look much different than what the codex is, but still gives us a direction and feel for the how the codex might end up.

Please remember that these are rumors of a playtest set.

leap: may charge +6'' extra & do not lose initiative while charging through difficult terrain

they just keep coming: enemies firing at models with this rule suffer -1 bs
models with BS 1 must re-roll any successful hits on a model with this target.

synaptic back lash: after a model with this rules dies then all friendly units within 6'' of the models death suffer a single strength 3 AP - hit.

Old one eye to have his toughness increased

will of the hive mind: while the squad remains with the full 3 models then the synapse range increases to 12''

rampant range: when charging units the carnifex gains rage & furious charge)
Living battering ram: the carnifex deals d3 hammer of wrath hits
natural disaster: if the carnifex forgoes its turn in a piece of terrain (ruins ect) it can destroy that terrain and remove it from play