Home » 40k » 6th Edition » News Headlines » Rumors » Space Marines » Warhammer 40k » The Latest on Space Marines: What is in the Codex and What is not.

The Latest on Space Marines: What is in the Codex and What is not. 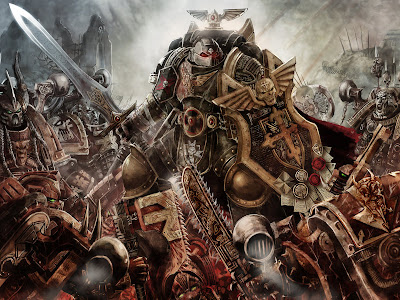 This is a massive information dump on what is coming in a few short weeks in the Space Marine codex. If you are still doubting they are coming..... I have read the White Dwarf with my own two eyes, they are coming.


A huge thanks to Zion for throwing all of this information into one format from 40k Radio. 40k Radio has a print copy of this codex, and on their show went through it in detail.

Thanks again Zion (and for sending me the link)

via Zion at talkwargaming and 40k Radio
General Information:
*240 Points for 3 Centurions with Grav-Cannons/Grav-Amps and Hurricane Bolters (for those who hate math, that means it's a 20 point upgrade for Grav-Cannon/Grav-Amps each).
*Assault Centurions have Move Through Cover
*Codex: Space Marines is largely in line with Codex: Dark Angels points wise.
*176 Pages in their copy of the codex (same as rumored)
*Hunter has "Savant-Lock". When shooting at a flyer you put a marker on it for each miss. The markers stay on the flyer until it leaves the table or is destroyed. At the beginning of every friendly shooting phase you roll for those markers. On a 5 or a 6 that missle hits.
*Artwook is nice, and book is Space Marines more in a general form. More updated fluff, not just the rehashed fluff.
*Some of the classic Black and White was colored, but a lot of new art too.
*Book is in sections for each founding chapter (plus the Black Templars)) and a large number of the *Successor Chapters to help players know who should be using what rules.
*Salamanders don't really have any successor chapters because their chapter had suffered a large number of casualties so they have a larger number of Marines in their chapter.
*"Equivilant to Forge World background" in terms of fluff.
*Forgeworld fluff included in the codex.
*Warlord Traits (Only One Chart for the Codex):

*Successor Chapters - You use whatever chapter tactics of your parent chapter. The ONLY Exception is the Black Templar.
*Homebrew - You can pick any tactic you want and use the Special Characters of that chapter. Those characters have to use the same Chapter Tactics as the same Chapter their from.
*Allies - "A Space Marine Detachment that has one set of Chapter Tactics MAY ally with another Space Marine Detachment with a different set of Chapter Tactics, Ultramarines and Raven Guard for example. For purposes of the Allies rules these allies are treated as being from two different codexes and are treated as Battle Brothers. Note that you may field models from two different chapters that have the same Chapter Tactics, such as Ultramariens and Praetors of Orpheus in the same detachment. These chapters are so closely affiliated that they count as a single army on the battlefield."
COUNT AS: If you want to use Vulkan in a Ultramarines army you have to play use the Salamander Chapter Tactics. So you CAN do "count-as" but you lock yourself into their Chapter Tactics. In short, Special Characters are locked to their specific Chapter Tactics

White Scars - BOTH RULES ALL THE TIME
*Born in the Saddle: Models in this detachment with the Bike Unit Type automatically pass Dangerous Terrain tests, and recieve a +1 to their Jink Cover Saves. In addition add 1 to their Strength when resolving their Hammer of Wrath hits.
*Fight on the Move: Models in this Detachment have the Hit and Run Special Rule. Note that this does not include models in Terminator Armor, Devastator Centurions or Assault Centurions.

Imperial Fists - BOTH RULES ALL THE TIME
*Bolter Drill: Models in this detachment may re-roll all to-hit rolls of 1 made with a bolt pistol, boltgun, stormbolter, heavy bolters, or combi-weapons that are firing as boltguns. This rule does not apply to Helfire, Kraken, Vengence or Dragonfire rounds.
*Siegemasters: Models in this detachment in Devastator squads and Centurion Devastator squads have the Tank Hunter special rule and add +1 when rolling on the building damage table.

Salamanders - BOTH RULES ALL THE TIME
*Flamecraft: Models in this detachment can re-roll their saving throws against wounds caused by flamer weapons as defined by the Warhammer 40,000 rulebook. Furthermore, flame weapons used by models in this detachment re-roll failed to-wound rolls and armor penetration rolls that don't cause a glancing or a penetrating hit.
*Master Artisan: During the army selection each character in this detachment may upgrade on of his weapons, even one they have purchased as an upgrade, to have the Mastercrafted Special Rule at no additional cost.

Marneus Calgar:
+25 Points
Artificer Armor standard (2+)
God of War: May use a single Combat Doctrine twice per game
Titanic Might: Re-rolls all armor penetrating hits in close combat. He may reroll glancing hits to attempt to get a penetrating hit. Must accept the second roll even if it is worse than the first.
Weapons and Ammo still the same. Terminator Armor still has Frag and Krak Grenades. Retain his Teleport Homer.
Terminator Armor is 10 points and doesn't prevent sweeping advances.Warlord Trait: Rolls 3 times on the Warlord Table, rerolling doubles, and chooses a single Warlord Trait.

Tigirius:
-65 points
+1 Wound
Master Psyker: May re-roll any or all of his rolls to choose which powers he knows. He has access to all the powers.
ML3
Hood of Hellfire: Psychic Hood that allows you to re-roll failed psychic tests
Rod of Tigiruis: Same as before with the addition of Soulblaze
Gift of Prescience: If your army contains Tigirius you may choose to re-roll reserves and apply the result to units of the same attachement.
Warlord Trait: Storm of Fire

Sergeant Chronus:
-20 points
+1LD
His vehicle gains It Will not Die

Khan:
-35 points (bike is still 20 point upgrade)
Bike does D3 Hammer of Wrath hits
Furious Charge
If Khan is your warlord friendly models with the Chapter Tactics White Scars special rule that are bikes or have dedicated transports have the Scout special rule.
Khan makes all bike squads who are 5 bikes or more count as troop choices.
Warlord Trait: Champion of Humanity

Vulkan:
The Forgefather: If Vulkan is your warlord, all meltas, multi-meltas and combi-meltas in this detachment become twin-linked.
Lost Digital Weapons
No longer Master Crafts Thunderhammers
Warlord Trait: Iron Resolve

Chapter Master Pedro Kantor:
+1 Attack
Oath of Rynn: If Chapter Master Kantor is your Warlord all models in Crimson Fist detachments have the Preferred Enemy (Orks) Special Rule. Furthermore, all such models within 12" of Kantor have +1 Attack while he lives. This bonus does not affector Kantor, and is not cimulative with the similar bonuses that the
Chapter Banner gives.
Still has Hold the Line: Crimson Fist Sternguard Veterans are scoring
Same Wargear and points
Warlord Trait: Iron Resolve

Helbrecht:
+5 points
+1 WS
Rites of Battle - Gone
Crusade of Wrath: Once per game, during the Assault Phase, all models with the Black Templar Chapter Tactics gain Hatred and Fleet until the end of the phase.
Sword of the High Marshalls is the same (+D3 attack on the charge)

Grimaldus:
-10 Points
-1 BS
+1 Wound
-1 Attack
It will Not Die (replaced "Only in Death Does Duty End")
Zealot
Relics of Hellsreach: Any Black Templar of a servitor in 6" gains a 6++ Invunerable save.
Unmatched Zeal: Black Templar models within of 6" of Chaplain of Grimaldus have the Zealot special rule.