Something New on the Horizon: Plastic Adeptus Mechanicus 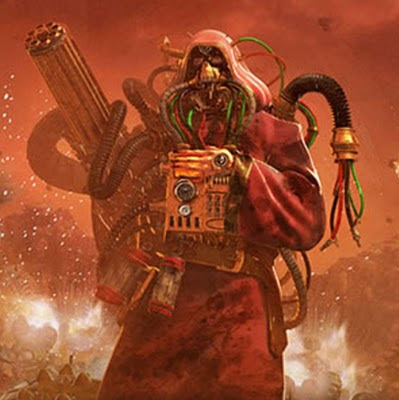 Plastic Adeptus Mechanicus have been seen on sprue. New greens of Arco-Flaggelants and big tanks seen. The future is once again looking bright.


I have been holding onto this for a couple days, as I wanted to place it well and get it ready for posting.

I want to talk briefly about this rumor. At first look, readers will think that this is a ton of wishlisting, and while I understand this, I do not believe this segment is made up. A lot had to be removed and deleted for obvious reasons, and I have no or very little doubt on this source of information.

So assuming this is true, realize the time frame is after all current codices have been released. We have discussed the "all codices released within 3 years" for 6th edition, and wondered what would be coming afterwards. So what is this......? Sisters of Battle, an Inquisition Codex, or something More? We don't know, and either does the source. What ever all of this means, its not coming any time soon, more like late 2015 at the earliest.

via An Anonmyous Source on Faeit 212
Some insights into models that are coming down the track.

A:I have seen a plastic adeptus mechanicus sprue with servitors and human sized (i.e. not space marine) adepts. This definitely exists because I have seen it, so don't confuse it with my second point, although I don't know where it fits in with the release schedule.

B: for over a year I have been seeing various photos of greens, and CAD print outs - so not just concept sketches  - for imperial models that are familiar to the inquisition books. I have seen custodes-style models, arco-flaggelants, and ogryn-sized servitors (greens) - as well as a pretty big tank that looks like a cross between a land raider and a leman russ, in the style of the exorcist (CAD).

it seems to have become common knowledge in circles that A) the studio has definite plans for all this, and that B) there will be a 'new' race army book at some point at the end of this edition, similar to Dark Eldar.

'like Dark Eldar' I simply meant that, from the business's perspective, Dark Eldar were a new race when they got their latest codex and models. So 'new race' doesn't necessarily mean something like Tau in 2001, and I'm fully expecting it to be an imperial faction.

A and B may be unrelated. But, based on this, I am guessing that either that this is where sisters of battle will end up, or that their relaunch will be refocused on the weirder parts of the Imperium. I just want to make it clear though, I've never seen a new sisters of battle sculpt
8/23/2013
Natfka
40k, 6th Edition, Rumors, Warhammer 40k