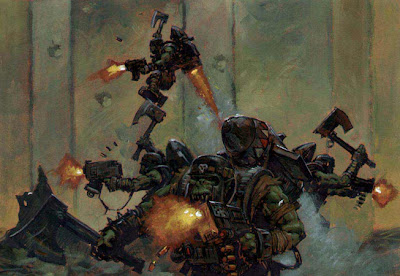 There seems to be a lot of whispers that 2014, at least the first part of it will be focused on Armageddon and the armies that were there. I have been getting small bits from a couple different sources, mentioning everything from Blood Axes, to Speed Freaks, Steel Legion to Salamanders, and even the Black Templar.


Here are some Previous Rumors as well as a couple small snippets that have not yet been revealed. There have been differing views from sources, and while so I thought I would get a bunch of this out. I am not going to go back and verify these anymore, just remember that they are rumors (add some salt), and from various sources.

The One that Started us Looking at Armageddon (different source)
http://natfka.blogspot.com/2013/08/a-huge-supplement-release-5-releases-in.html

A verifying source with additional details (a solid source chiming in to help us sort things out)
http://natfka.blogspot.com/2013/08/new-units-for-codex-supplements-and.html