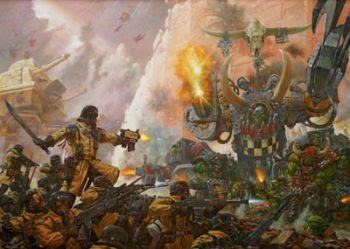 Earlier this morning we had a rumor set about an Armageddon simultaneous supplement release, including a warzone, and codex supplements. While this is very cool, after some thinking, there was a lot more to that rumor than first appears.


I have been told flat out, that there will not be codex supplement releases for any codex that there is not a 6th edition codex for.

So while re-reading the earlier rumor, which has a good source, and had a lot of verifying information (that was deleted for the post, and is now gone), I was thinking about the timing of codex releases when this rumor pans out.

That would clearly mean that if Imperial Guard and Orks are getting codex supplements 6+ months out, that we would be receiving both of these codices during that time.