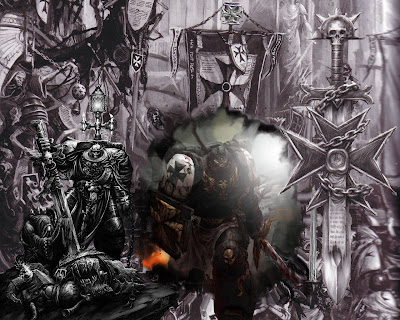 Well, its been found, and I've read it. The Black Templars are officially part of the Space Marine codex. Before readers get upset about it, Robbin Cruddace talks very specifically about the subject in the September White Dwarf.


I will not quote what is said, for obvious reasons. Here is a rundown of what is important.

*The Black Templar are now part of the Space Marine codex
*Black Templar are the only chapter with access to Crusader Squads with Land Raider dedicated transports. Also the only chapter with Emperor's Champions.
*Allows many more units and flexibility being apart of the Space Marine codex.
*Unique Black Templar background and lore is in the codex as well.
*Each of the first founding chapters and the Black Templar have access to unique chapter tactics for their chapter.
*Imperial Fists are seige specialists and tank hunters
*Salamanders are flame weapon experts
*There are 30 successor chapters mentioned in the new codex.


I take this to meaning that the Black Templar will be getting their own supplement. As well as others like the Imperial Fists and Salamanders.