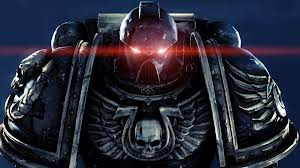 Space Marines are right around the corner, and here is a great compilation put up by the Emperors Champion over on Bolter and Chainsword. A lot of the information below has been compiled from bits coming out of 40k radio, who seem to have an inside copy of the codex.

So lets take a look at what is here, and its time to get excited for Space Marines, if you are not there already.


via The Emperor's Champion on Bolter and Chainsword
Credit to 40k Radio for tons of this info.
https://www.facebook.com/pages/40K-Radio/147396461962884?fref=ts
WARGEAR:
CHAPTER RELICS:
There are 6 different ones.
Two swords, one Bolter, set of armor, one Storm Shield and one banner
They range from 25pts to 65pts.
One Chapter Relic grants a 6+ Invulnerable Save. (It's unclear who benefits from the Save generated by the Relic)

MARNEUS CALGAR:
Is now 275pts
Is equipped with Artificer Armour by default. May upgrade to the Armour Of Antilochus for +10pts.
Marneus Calgar can take three Warlord traits.
The Armour Of Antilochus - his Terminator Armor - does not prevent him from preforming a Sweeping Advance, and it has a built in Teleport Homer.

VARRO TIGURIUS:
Tigurius is Mastery Level 3.
He knows all Psychic Disciplines.
He can re-roll his dice when determining his psychic powers.
He can re-roll Reserves rolls(even successful ones).
The Hood Of Hellfire is now a Psychic Hood that lets him re-roll failed Psychic Tests.

ANTARO CHRONUS:
Chronus is cheaper.
He increases the BS of his tank by +1.

RAVEN GUARD CHAPTER TRAITS:
They all get the Stealth USR.
They get the ability to use their Jump Packs in the Movement and Assault Phase.
KAYVAAN SHRIKE:
Shrike can only Infiltrate with Jump Infantry.
????

IRON HANDS CHAPTER TRAITS:
All Iron Hands have the Feel No Pain USR on a 6+.
All Characters and vehicles have the It Will Not Die USR.
Iron Hands get a 1+ to Blessing Of The Omnissiah

BLACK TEMPLARS CHAPTER TRAITS:
A Black Templars army may choose one of the following:
"Accept any Challenge, No Matter what the Odds" - Gain the ability to re-roll To-Hits rolls, and gain the Rending USR when you're in challenges.
"Crusaders" - Gain the Adamantium Will and Crusader USR's.
The Black Templars retain their current Ally Matrix.
The Black Templars may not take Librarians.
Black Templars may take Crusader Squads consisting of up to 10 Initiates (i.e. Tactical Marines) and up to 10 Neophytes (i.e. Scouts).
Black Templar Initiates may exchange their Bolters for Close Combat Weapons for free.
A Crusader Squad may purchase up to 2 Power Weapons, if you take a Sword Brother (i.e. the Veteran Sergeant upgrade).

HELBRECHT:
Once per game Helbrect can grant a Black Templars unit the Hatred and Fleet USR's for an Assault Phase.
May take a unit of Honor Guard.

GRIMAULDUS:
Grants the Zealot USR to any unit he joins.
If a unit is within 6" of Grimauldus' Servitors, they gain a 6+ Invulnerable Save.
Grimauldus has the It will not Die USR.
He has Wounds:3 and Attacks:3

CAPTAIN:
Equipping the Captain with a Bike allows a single 5-man Bike Squad to be taken as a Troops choice.

CHAPLAIN:
There is only one level of Chaplain.
Now has Attacks:2 and Wounds:2.
Chaplain grants Zealot to any squad he joins.

MASTER OF THE FORGE:
Now has the It Will Not Die USR.

TACTICAL TERMINATORS/ASSAULT TERMINATORS:
Thunderhammers & Stormshields cost +5pts per Assault Terminator to upgrade.
There is no way to make Terminators into Troops choices or Scoring units.

TECHMARINES:
No news to report.

Dedicated Transport:
- They can select a Land Raider as a dedicated transport.

Special Rules:
- Move Through Cover
- Slow and Purposeful
- Decimator Protocols(Can fire up to two weapons in each shooting phase)
- Very Bulky
- Chapter Tactics
- And They Shall Know No Fear

DREADNOUGHT:
No news to report.

VENERABLE DREADNOUGHT:
No news to report.

IRONCLAD DREADNOUGHT:
No news to report.

TROOPS UNITS:
TACTICAL SQUADS:
2 points cheaper per Marine (14pts each).
Access to a Graviton Rifle as a Special Weapon option.

SCOUT BIKES:
No news to report.

Dedicated Transport:
- They can select a Land Raider as a dedicated transport.

Special Rules:
- Slow and Purposeful
- Decimator Protocols(Can fire up to two weapons in each shooting phase)
- Very Bulky
- Chapter Tactics
- And They Shall Know No Fear

VEHICLES:
RHINOS/RAZORBACKS:
No news to report.

DROP PODS:
Transport capacity has dropped back down to 10.

STORMTALON:
No news to report.